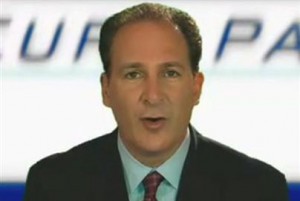 Talk about a short celebration. Just eight hours after President Obama walked onto a Chicago stage to give his victory speech to an adoring crowd, his re-election party would come to a crashing close. As the opening bell rang on Wall Street, investors, who only days ago sought certainty, had suddenly become skeptics. The thought of four more years was suddenly not so appealing, as stocks posted their biggest one-day drop in a year.

When asked if the country was on track to be better off four years from now, Peter Schiff, author of The Real Crash: America’s Coming Bankruptcy, answers an unequivocal “No.”

“If Obama thinks that Bush dealt him a weak hand, wait til we see how much weaker the hand is going to be that Obama deals his successor,” Schiff says in the attached video. “We’re going to be in much worse shape.’

How so? Well, in many ways if you follow the thinking of this well known, articulate and published uber-Bear. By Schiff’s calculations, “the stock market is correct in going down” today since he says higher taxes on companies (at the corporate and/or individual level) makes those companies less valuable. So lower stocks is one area he predicts.

Being deeper in debt is another. In fact, he says we’ll be at $20 trillion in a couple of years, and going higher from there. And this will bring upon the country’s next looming crisis.

In Case You Missed It:  Obamagate Must Result in Criminal Prosecutions

Also, this noted gold bug is forecasting higher unemployment, higher food and energy prices, as well as sharply higher interest rates. He brushes aside the fact that a current flight to quality is benefiting both Treasuries and the dollar right now.

This is what Schiff call the real fiscal cliff. If he’s right, you’ve been warned. If he’s wrong, it’s a buying opportunity. Give us your thoughts and feedback down below.

Senate Majority Leader Harry Reid (D-NV) has a new idea to make it easier to pass legislation: Cut Republicans out...