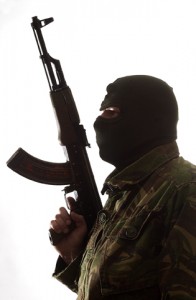 President Obama gave Egypt almost $400 million in military aid only a month ago to arm itself.  I asked myself why they need this aid? Who exactly is Egypt’s enemy and who do they need to defend themselves against that warrants this massive American donation which is funded by the US taxpayers money with no return on investment at all, unlike Israel who shares technology development and other mutual interests.
It is obvious to the world and should have been obvious to the vast majority of Americans that Egypt is now controlled by the Muslim Brotherhood (an enemy of the west) who in turn are the real administrators of Hamas and certainly are on a religious quest to impose their laws globally.
Not only have senior members of the Muslim Brotherhood openly stated that they despise America and anything America stands for they have also said that they will eventually make changes to the peace treaty that was signed between Egypt and Israel.
I figure,(even if I am only 10% correct) that Egypt will eventually get more aid now from Obama and the American public and in turn we will see yet again tensions and conflict rise between Egypt and Israel and Egypt protecting the Hamas terror organization while they continue their barrage of missiles into Israel’s civilian population.
Israel strategically are faced with too many threatening military fronts and it is difficult to keep putting out “small irritable fires”. There will be a time soon where I see an Israeli government saying enough is enough.
Will the snubbing that President Obama imposed upon Netanyahu suggesting that the Israeli Prime Ministers warning calls pertaining to an Iranian nuclear weapon development was just “noise” haunt the American President? Was the sarcastic message relayed openly to the Israeli public one that should be taken seriously or just as “noise’?
Are the Americans who supported and sponsored the Obama reelection aware that they may have possibly actually voted for destruction and death that will certainly take place on a much larger scale in this already volatile region called the Middle East.
As I watched the Palestinian terror organization Hamas TV last week and I saw dancing in the streets and joy at the US election results.
They know that a Obama controlled America will be to their full advantage.
In Case You Missed It:  Boat Named “With God’s Blessing” Lands in Florida Keys On Christmas Morning With 15 Cuban Refugees
Posted in Tyranny and tagged Egypt, Islam, Muslim Brotherhood, Muslims, Obama, Terrorism, White House.

Obama's administration deliberately held off implementing burdensome regulations that favored environmentalists, labor unions, and dealt with Obamacare in the month...