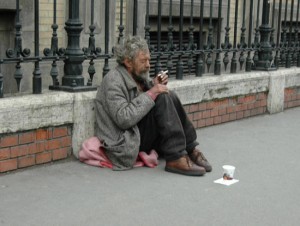 Don’t worry he may not have a job or home, but he has healthcare

What is happening is massive layoffs due to what we know as Obamacare, a massive multi trillion dollar healthcare bill to provide healthcare to most everyone, but at what cost? At the cost of losing a jobs or hours, or higher taxes for the already strapped middle class.

Here is the new results just this week and the bill is not even in effect yet, its Armageddon in the soon horizon. No wonder Obama delayed its effect until after the election.

Here is the short list and Obamacare is not even in effect yet, wait until that Tsunami hits. These companies all claim to have to lay off people due to Obama healthcare bill.

Now major non Health related companies are finding Obama to expensive and having to make necessary cuts, Papa Johns is the latest.

In response to Obama’s re-election. Papa John’s CEO John Schnatter has announced he will pass the costs of Obamacare on to his workers by cutting their hours.

The pizza magnate admitted that Obamacare had plus points: “the good news is 100 percent of the population is going to have health insurance.” He explained his decision to cut ma hours as a necessity: “That’s what you do, is you pass on costs. Unfortunately, I don’t think people know what they’re going to pay for this.” Pizza prices will rise as staff hours fall, says CEO.

This is getting ugly and quick, will Obamacare throw the USA into a deep recession or depression?

Scouting for Food: The Irreplaceable Troops of Our Civil Society

The Government-as-Caretaker State got a regrettable boost this week. But that hasn’t put a stop to the demonstrations of why...