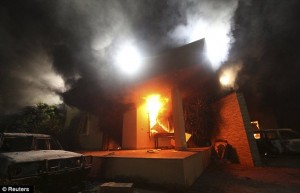 The ploy failed and now we know that that the CIA Annex in Benghazi held three Libyan militia terrorist for days and that retrieving these detainees was the motive for the September 11th terror attack on the US consulate.

The CIA annex was a detention site for local militia forces and even for some prisoners from others. It was reported on October 26th based on conversations with sources in touch with those who were at the annex that night, that the CIA contractors had captured three Libyan prisoners who they handed over to the Libyan authorities when they fled Benghazi. We never knew who those prisoners were; we didn’t know what ended up happening to them but we have now learned that those three prisoners had been held for a few days at the annex and more than just Libyan militia members were held there. There may have been prisoners from other African countries maybe even the Middle East. They were interrogated allegedly by CIA contractors.

Paula Broadwell, now known to be ex-CIA chief Petraeus’ mistress, apparently leaked classified information on the same topic to an audience at the University of Denver the same day as the Fox News report regarding this information. That the attack on the consulate was to try get these prisoners back, the CIA knew this, Obama knew this so why did they play the youtube Video card?

From the halls of Montezuma to the shores of Tripoli, the Marine Corps has answered the nation’s call each and...