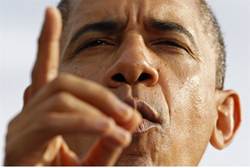 Did the White House use their knowledge of former CIA director David Petraeus’ affair to get favorable testimony from him regarding the deadly terror attack on our Libyan consulate?

According to syndicated columnist Charles Krauthammer, Petraeus told the House Intelligence Committee on September 14, three days after the attack, that it was “a spontaneous protest against the film ‘Innocence of Muslims.'”

Appearing on FOX News’ “Special Report,” Krauthammer said the Obama administration was holding the affair over Petraeus’ head for that testimony: “As long as they needed him … everybody was silent. And as soon as the election’s over, as soon as he can be dispensed with, the sword drops and he’s destroyed.”

But it now appears that Petraeus isn’t going quietly into the night. With his legacy in shambles, and little to lose, FOX News is reporting that the former CIA director wants to testify at tomorrow’s intelligence committee hearings.

For weeks President Obama and his cronies continued to perpetuate a grand lie to the American people. By bogusly suggesting the attack was a “spontaneous reaction” to a Muslim video posted on YouTube, administration officials appear to be engaged in a cover-up on a broader scale than even Watergate.

Is Obama attempting to mislead the American people for political gain or to gain favor in the Muslim world? What is he trying to hide?

The American people are asking questions and demanding answers!