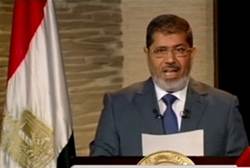 Morsi speaks during his first televised address to the nation

In a televised statement, presidential spokesperson Yasser Ali said that Morsi has also summoned the Israeli ambassador in Cairo to convey Egypt’s rejection of the Israeli airstrikes in Gaza.

“The president has ordered the Egyptian representative at the United Nations to call for an emergency meeting at the Security Council. In a phone call with the Arab League general-secretary, the president has also called for an emergency meeting for the Arab foreign ministers,” Ali was quoted by the website of the Egyptian daily Al-Ahram as having said.

The Egyptian move was a reaction to the IDF’s Operation Pillar of Defense which was launched Wednesday afternoon.

The IAF fired a missile at a car in Gaza, killing the commander of Hamas’s “military” wing, Ahmed Jaabari.  The IAF then also struck launch silos for Hamas’s longer-range Fajr rockets, which can hit central Israel, in order to preclude their use.

On Tuesday, even before the IDF operation in Gaza began, Egypt’s Muslim Brotherhood, the movement to which Morsi belongs, blamed Israel for escalating the situation in Gaza.

The statement by the Muslim Brotherhood’s Freedom and Justice Party defined Israel as a “Zionist occupier” and a “racist state” while describing Netanyahu and Foreign Minister Avigdor Lieberman as being members of the “fringes of the extreme right.”