Operation Pillar of Defense: What You Need to Know

Israel is not interested in stoking the flames, but for the past five days there has been constant missile fire at Israel and mothers and children cannot sleep quietly at night … There is a limit to what Israel can absorb.

Once again, Israel finds itself engaged in a military operation to end rocket fire from Gaza. The predictable media frenzy has begun. In this primer we will give you the background and information you need to respond to media bias against Israel.

For the third time in a month, the civilians of southern Israel are under continuous rocket attack from the Gaza Strip.

The current attacks began on Saturday night (Nov.10) when Palestinian terrorists fired an anti-tank missile at an army jeep traveling on the Israeli side of the border fence. Four IDF soldiers were injured. Since then, over 120 rockets have been fired at Israeli civilians.

The lives of 1 million Israeli civilians are being threatened and daily life in southern Israel has been totally disrupted.

The residents of communities near the Gaza border suffer constantly from rocket and mortar shell attacks. These attacks occur almost on a routine basis, as do escalations of other types of terrorist activities carried out by Hamas and the other terrorist organizations that operate under Hamas’ protection.

The pauses between the waves of rocket attacks are shortening. In the past month, Israel has been subjected to three separate periods of escalation. Since the beginning of the year, more than 800 rockets and mortar shells have been fired at Israel, a record amount since the end of Operation Cast Lead (January 2009). This peak is similar to the attacks that occurred in 2007-8.

HOW TO ANSWER ISRAEL’S CRITICS

Claim: “Israel rather than Hamas is responsible for this latest outbreak of violence.”

Response: The media have short memories. Rocket attacks have been a feature of everyday life for Israelis in the south for many years despite the lack of coverage in the international media. Israel has acted with enormous restraint but there is a limit to how much any country should be expected to tolerate.

It is Hamas and other Gaza terror organizations that have chosen to escalate the violence in the past few days, beginning with the attack on the IDF jeep, not to mention the many incidents that have occurred over the past month, virtually ignored by the mainstream media.

Below is a timeline summary of the past month’s events courtesy of the Jerusalem Post:

– October 23
An IDF officer is critically wounded by an explosive device while on patrol near the Gaza border fence. PFLP takes responsibility.

– November 8
In a firefight with Palestinians, apparent IDF fire kills a 13-year-old Palestinian boy. Palestinian mortar shells lightly injure an IDF soldier along the border later in the day.

– November 10-12
Palestinian terror groups fire upwards of 100 rockets and mortars into southern Israel. Islamic Jihad and a Salafi Jihadist group claim responsibility for a majority of the rockets. At least eight Israelis are injured in the attacks.

– November 13
An apparent cease-fire is mediated between Israel and Hamas, with both sides conditioning their silence on the other side’s halting attacks. Prime Minister Binyamin Netanyahu warns of future strikes, saying “I am responsible for choosing the right time to exact the highest possible price – and so it will be.”

– November 14
Four rockets hit southern Israel in the morning; the IDF says it is looking into the possibility the rockets were fired from Sinai.

Claim: “Israel’s response is disproportionate to the threat.”

Response: Palestinian rockets are not “home made” projectiles – they are deadly and threaten a large number of Israeli population centers. Gaza’s status as a terror base has also been enhanced as a result of quantities of upgraded weaponry smuggled from Sudan, Libya and Iran, which pose an even greater threat to the Israeli civilian population. 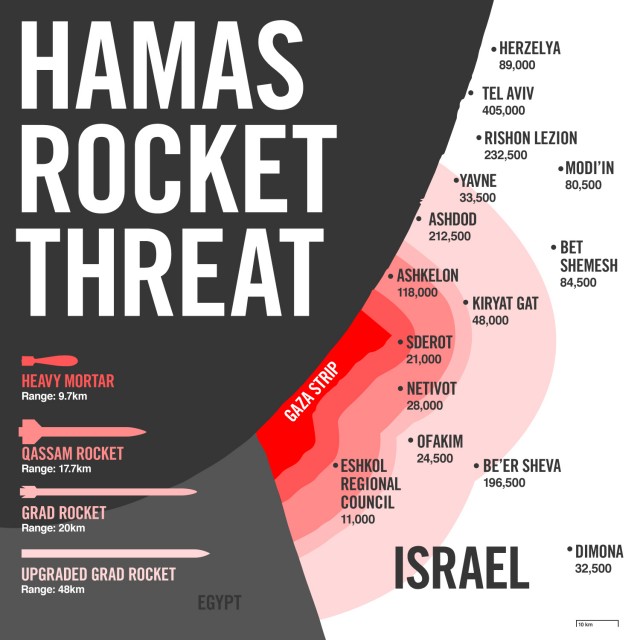 Response: The Iron Dome anti-missile defense system has proven to be remarkably effective. However, no missile shield of this nature offers 100% protection. There are also a limited number of Iron Dome batteries to cover the entire region. While Israeli casualties have been low in proportion to the number of rockets fired, this is not from a lack of incentive on the part of Palestinian terrorists who are attempting to cause as many deaths and injuries as possible. At this time, three Israelis have been killed by a rocket strike on the southern town of Kiryat Malachi.

Claim: “This isn’t a fair fight – more Palestinians than Israelis are dying.”

Response: Casualty figures taken by themselves do not tell an accurate story. Israel does not intentionally target Palestinian civilians. The IDF takes extraordinary measures to avoid Palestinian civilian deaths. In stark contrast, Palestinian terror organizations intentionally target Israeli civilians and use the population of Gaza as human shields, storing and firing rockets from within populated areas. This is a double war crime. The only reason more Israelis are not dying is due to the reinforced rooms, bomb shelters, Iron Dome and early warning systems that Israelis rely upon to protect them.

In order to reduce the risk to Gazan civilians, the IDF has even dropped leaflets warning the residents of the Gaza Strip to stay away from Hamas and other terror organizations’ operatives and facilities that pose a risk to their safety.

The contents of the leaflet: 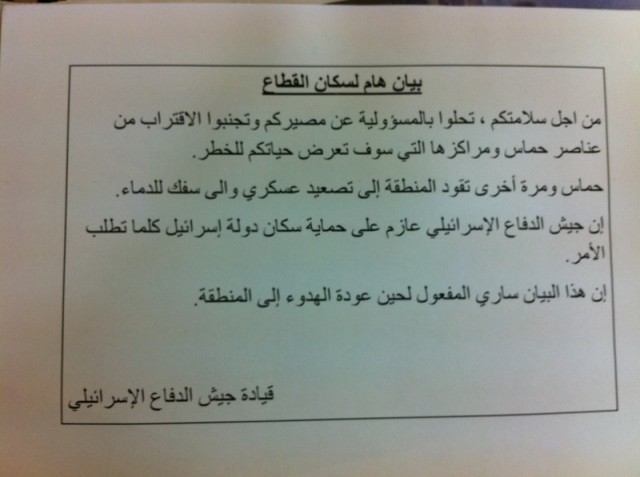 “Important announcement for the residents of the Gaza Strip:

For your own safety, take responsibility for yourselves and avoid being present in the vicinity of Hamas operatives and facilities and those of other terror organizations that pose a risk to your safety.

Hamas is once again dragging the region to violence and bloodshed. The IDF is determined to defend the residents of the State of Israel. This announcement is valid until quiet is restored to the region. Israel Defense Forces Command.”

Claim: “Israel is intent on creating a humanitarian disaster inside the Gaza Strip.”

Response: Israel’s targets inside Gaza are military and not civilian. In addition, the border crossings remain open allowing for the routine passage of humanitarian goods.

Response: The use of targeted killings is a last resort when it is impossible to capture a terrorist and put him on trial as is the case of the Gaza Strip. The IDF has deemed it necessary to disrupt Hamas’ ability to operate and has cut off the head of the snake using pinpoint accuracy to reduce the risk of collateral damage.

Ahmed Jabari has personally directed numerous deadly terrorist attacks against Israeli civilians and was responsible for the abduction of IDF soldier Gilad Shalit as well as the violent Hamas takeover of the Gaza Strip.

KEEP UP TO DATE WITH ALL THE LATEST NEWS

HonestReporting will keep you updated with breaking news and developments as well as monitoring the media during the days ahead.

You can also keep up to date by following the IDF Blog as well as trusted news sources such as The Times of Israel and Jerusalem Post.

There is only one precedent of a modern democracy besieged under rocket attacks. During the afternoon of September 7, 1940,...