The Israeli government has approved the call-up of 75,000 reservists to participate in the Gaza fighting, as infantry, armor and engineering units mass near Gaza awaiting the command to enter the Hamas-controlled terror state. 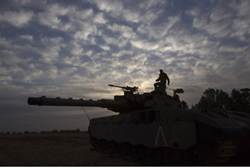 No one outside the IDF’s leadership knows if the IDF intends to invade Gaza, when the IDF incursion will start, and what its targets will be.

If an incursion does take place, there are different possible scenarios for it.

One possibility is that the military will strive to finish what it started – and did not complete – in the 2008-9 Cast Lead campaign: namely, topple Hamas and bring down its leaders, dead or alive. Among the reasons why this move was not carried out in Cast Lead was that Hamas’s leadership hid under the Shifa Hospital in Gaza, in the knowledge that the IDF was loath to strike such a facility. Another reason was that Sgt. Gilad Shalit was being held hostage by Hamas at the time.

This option is favored by some hard liners, but also by some in the leftist camp, who hope that Hamas’ leadership will be replaced by Mahmoud Abbas’s Fatah, which they perceive as being moderate and “a partner for peace.”

The problem with this option is that even if the IDF performs brilliantly, it is hard to imagine how it can be accomplished without heavy close-quarter fighting between IDF ground forces and Hamas. This would entail IDF casualties that the Israeli public – goaded by a notoriously pacifistic press – may not be willing to accept.

Toppling Hamas could also involve a large number of Arab casualties. This, in turn, might place pressure on Egypt’s president, Mohammed Morsi, to carry out steps like severing diplomatic ties with Israel or even abrogating the peace treaty with it.

Another option open to the IDF is to enter Gaza without entering Gaza City, and establish a temporary military presence, possibly cutting off the north and south of the Gaza Strip from the center. The IDF could then conceivably enforce a type of open-ended siege or curfew on Gaza, firing from the air at every military target it sees, including all armed individuals, until Hamas can take this no longer.

At the same time, Israel could conduct talks with Egypt and other Arab countries, in an effort to reach a solution that would include an IDF pullout and a complete cessation of terror attacks from Gaza against Israel.

In Case You Missed It:  The Second Amendment is the Inalienable Right from which All Other Rights Are Guaranteed
Posted in Israel, Terrorism and tagged Egypt, Freedom, Gaza, Hamas, Islam, Israel, Jihad, Military, Palestinians, Terrorism.

A U.S. congresswoman is warning that while the world’s eyes are on Iran’s growing threat against Israel, the Islamic nation’s...