Noam Bedein is a photojournalist, lecturer and founder/director of Sderot Media Center. He lives approximately two miles away from the Gaza-Israel border in the missile-battered Israeli city of Sderot. 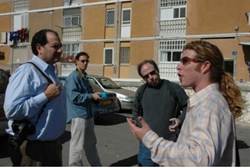 Noam Bedein with Reporters in Sderot

From the last day of Operation Cast Lead (January 18, 2009) until the 1st day of Operation Pillar of Defense, the Gaza Hamas regime launched 2,000 aerial attacks against Israel. That was the third ‘ceasefire’ between Israel and Hamas.

There is talk about ‘an opportunity to reach an understanding with Hamas,’ relying on the notion that Israel must ‘give Hamas a chance for a ceasefire with Israel.’

Let us refresh our memories. From November 26, 2006, until May 15, 2007, the first ‘ceasefire’ between Hamas and Israel lasted for six months. Here is the statement made by Hamas five days before agreeing to that ceasefire: ‘Hamas’s military wing will stop rocket fire when residents evacuate the city of Sderot.’ (from November 21, 2006)

During that ‘ceasefire’, the Gaza Hamas regime l launched 315 attacks on Sderot and the western Negev. There was no IDF response to those attacks during that “ceasefire”.

The second ‘ceasefire’ took place from June 19, 2008 (1 year after the Hamas military took control of Gaza) until December 19, 2008.during those six months of “we cease, they fire”,The Gaza Hamas regime launched 530 attacks on Israel.

2008 was the most intense year of the decade; the entire western Negev region was under constant rocket fire, with approximately 3,200 aerial attacks on Israel.

Three days before the end of 2008, the IDF military launched “Operation Cast Lead” to stop the attacks from the Gaza Hamas regime.

One question needs to be asked: What nation in the world would allow for an obviously one-sided ceasefire? What other nation would allow for one missile to explode within its territory, let alone allowing an entity to now place the majority of its population under the threat of a missile attack?

It is worth noting that Israel’s adversaries do not advocate a ‘ceasefire’; they promote a hudna. A hudna means no more than a temporary respite in the war between Islamic forces and non-Islamic forces. The authoritative Islamic Encyclopedia (London, 1922) defines hudna as a “temporary treaty” which can be approved or abrogated by Islamic religious leaders, depending on whether or not it serves the interests of Islam; with the proviso that a hudna cannot last for more than 10 years.

What is the alternative?: A Demand of Unconditional Surrender from an enemy bent on Israel’s destruction and a military operation with that goal.