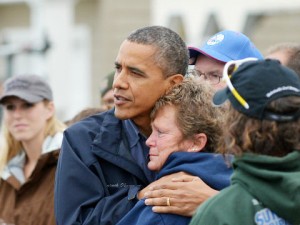 A hug from Obama, but no other help

Many political analysts believe Superstorm Sandy gave President Obama a small but critical boost before the 2012 election, allowing him to look like a bold, competent leader while also juggling his campaign duties.

Many voters said they appreciated how much he “cared” about the plight of the victims, and vowed to cut through any “red tape” to grant them immediate help.

On October 31, the White House posted a photo of the president hugging a disheartened woman in a blue sweatshirt, also featuring her in a video about Obama’s post-Sandy efforts:

According to NorthJersey.com the woman is named Donna Vanzant and, though Obama promised her “immediate” assistance, she’s apparently seen no government help roughly a month later.

Kevin Wexler, who wrote the article, explains that he was present when the initial promise was made and recently chose to check in on Vanzant’s progress:

Vanzant estimates that her business losses will amount to at least $500,000, including the cost of repairing the marina.

Her son Stephen, 26, took a two-week leave from the Navy to come home to help out. He has started a Facebook page called Rebuild North Point Marina to seek contributions.

Vanzant has been moved by the many kindnesses she received from friends, family and customers. She heard from countless people after the photograph of her hug with the president was published, including from strangers as far away as Vietnam who wished her well.

She said she was honored to meet Obama, but she is also frustrated that she has yet to receive help from either her insurance companies or the government. “The president told me I would get immediate help,” she said.

“Looking back on it, it wasted a lot of people’s time,” she said of the visit. [Emphasis added]
Wexler adds that Vanzant’s future remains in the air.

“I am just moving minute by minute,” she said, “because the insurance companies are telling me no, no, no!”

In Case You Missed It:  Biden Was Fed Pills to Function During Campaign, Supervised by Dr. Jill; Before Dosing Biden Was ‘Like a Small Child’: Tucker Carlson Source
Posted in Tyranny and tagged New Jersey, New York, Obama, US Citizen.

As we approach the “fiscal cliff,” there was little doubt that famed investor and self-appointed political sage Warren Buffett would...