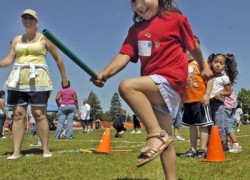 Justice is flowing like a river for an Oklahoma mom. A Piedmont police officer was fired for writing an excessively hefty fine for her three-year-old’s “public urination” on the family’s property.

Ashley Warden was fined $2,500 earlier this month after three-year-old Dillan pulled down his pants to urinate on his grandmother’s front yard. The police officer, Ken Qualls, was in his car at the end of the block when he spotted the young urinator. Qualls wasn’t fazed by the fact that the young toddler was on private property when the wetting occurred. “I said we are on our property and he said it’s in public view,” recalls Jennifer Warden, Dillan’s grandmother.

“For $2,500 we all should be able to pee all over our whole yard,” commented Ashley Warden.

After reports of the incident sparked outrage across the country, Piedmont city manager Jim Crosby confirmed that Qualls had been fired after a hearing over the matter.

This case brings up two important questions: whether the punishment fit the crime and whether the crime should have been punished at all.

Here, the principle that the punishment ought to fit the crime seems to have been watered down. As noted above, Dillan likely didn’t harbor any malicious intentions and, as the local news reported, did not even finish the act. So was a fine of a couple thousand dollars really the best way to handle this? Wouldn’t a gentle warning from the police officer have sufficed? Or wouldn’t a correction from his mother have been enough?

This brings up the second question: whether Dillan’s conduct was worthy of a fine at all. Young Dillan, still in pull-ups and potty training, in all likelihood believed that what he was doing was perfectly okay. Under the common law, a three-year-old is not even capable of committing a crime.

All this, coupled with the fact that no one was hurt (except perhaps his grandmother’s lawn), seems to point to the conclusion that Officer Qualls harshly punished an innocent action. The office of the Piedmont city manager implicitly agreed when they relieved Qualls of his job.

This is not to say that the police shouldn’t enforce laws prohibiting public urination. On the contrary, such behavior would be unacceptable if the culprit were an adult. But should mothers really have to fear police action every time they hear their toddlers exclaim that they have to use the bathroom?

Overcriminalization can occur at every level of the criminal justice system and must be fought by legislators, law enforcement officers, judges, and prosecutors. Failure at any level can lead to injustice for American citizens.

But overcriminalization is a problem that can be helped at every level as well. Legislators need to write good laws, law enforcement officials need to exercise good judgment (which they do in most cases), and prosecutors need to be reasonable in the cases they prosecute. Warden’s whiz-kid is just one example of the undesirable effects of the ovecriminalized state.

David Jackman is currently a member of the Young Leaders Program at The Heritage Foundation. For more information on interning at Heritage, please visit: http://www.heritage.org/about/departments/ylp.cfm.

Some Obamacare Legal Challenges Are Alive and Well

On Monday, the U.S. Supreme Court, in granting a petition for rehearing in Liberty University v. Geitner, vacated the U.S....