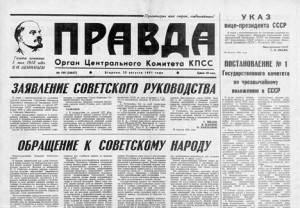 While a small majority of the American people continue to celebrate the re-election of the worst and most corrupt president in US history, the rest of the world is mocking our stupidity. Looking from the outside, they see how Obama has constantly lied to the American people. They also see him for what he really is, a communist. And they see him repeating the same mistakes that other communist leaders made in the past. Yet, the 62 million Americans that voted for Obama are blind to what is happening to them.

Pravda is the most popular Russian newspaper in their country. In a recent article, it stated:

“Putin in 2009 outlined his strategy for economic success. Alas, poor Obama did the opposite but nevertheless was re-elected. Bye, bye Miss American Pie. The Communists have won in America with Obama but failed miserably in Russia with Zyuganov who only received 17% of the vote. Vladimir Putin was re-elected as President keeping the NWO order out of Russia while America continues to repeat the Soviet mistake.”

“After Obama was elected in his first term as president the then Prime Minister of Russia, Vladimir Putin gave a speech at the World Economic Forum in Davos, Switzerland in January of 2009. Ignored by the West as usual, Putin gave insightful and helpful advice to help the world economy and saying the world should avoid the Soviet mistake.”

“Recently, Obama has been re-elected for a 2nd term by an illiterate society and he is ready to continue his lies of less taxes while he raises them. He gives speeches of peace and love in the world while he promotes wars as he did in Egypt, Libya and Syria. He plans his next war is with Iran as he fires or demotes his generals who get in the way.”

“O’bomber even keeps the war going along the Mexican border with projects like ‘fast and furious’ and there is still no sign of ending it.  He is a Communist without question promoting the Communist Manifesto without calling it so. How shrewd he is in America. His cult of personality mesmerizes those who cannot go beyond their ignorance. They will continue to follow him like those fools who still praise Lenin and Stalin in Russia.  Obama’s fools and Stalin’s fools share the same drink of illusion.”

“President Vladimir Putin could never have imagined anyone so ignorant or so willing to destroy their people like Obama much less seeing millions vote for someone like Obama. They read history in America don’t they? Alas, the schools in the U.S. were conquered by the Communists long ago and history was revised thus paving the way for their Communist presidents. Obama has bailed out those businesses that voted for him and increased the debt to over 16 trillion with an ever increasing unemployment rate especially among blacks and other minorities. All the while promoting his agenda.”

“Russia lost its’ civil war with the Reds and millions suffered torture and death for almost 75 years under the tyranny of the United Soviet Socialist Republic. Russians survived with a new and stronger faith in God and ever growing Christian Church. The question is how long will the once “Land of the Free” remain the United Socialist States of America?  Their suffering has only begun. Bye bye Miss American Pie!”

I’m not sure I could put it any more clear and succinct as did this Russian columnist.  Barack Hussein Obama is a communist and is turning America into a communist or socialist nation.  He is following the teachings of people like Stalin and Lenin, whose ideas destroyed their nation and led to its eventual downfall.  Instead of learning from the past, Obama seems destined to repeat it.

If you want to see what America will be like in the near future, just look at the former Soviet Union before Glasnost and the influence of western culture.  Look at the bleak images of people standing in line, hoping to be able to get a loaf of bread and some milk.  Look at the factories and sweat shops and at the same time notice how few small stores there are.  Look at their entertainment which consisted of a few state run television and radio stations.  Look at the loss of all personal freedoms and dignity.  Look at a people that are depressed because they are oppressed and you will be seeing us in the not too distant future.

Yeah, I have to agree.  Obama was re-elected by a truly illiterate society.

How to Make Harry Reid’s Power Grab Work for Conservatives

Senate Majority Leader Harry Reid (D–NV) is expected to try to change the rules of the Senate to shut out...