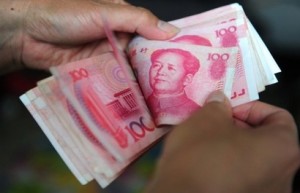 The Obama administration on sill on the same old path said China isn’t a currency manipulator and made the claim that under U.S. law they okay,  at the same time they claimed the yuan “remains significantly undervalued” and needs to rise further. The Federal Reserve and Obama refuse to acknowledge they ate currency manipulators.

Feds said China “has substantially reduced the level of official intervention in exchange markets since the third quarter of 2011,” the Treasury said in a statement accompanying its semi- annual currency report to Congress yesterday. The yuan has gained 9.3 percent in nominal terms and 12.6 percent in real terms against the dollar since June 2010, the Treasury said.

“It appears that the strategy of the last two administrations to use diplomacy rather than confrontation in dealing with the yuan’s value is having some positive results,” William Reinsch, president of the National Foreign Trade Council, a Washington-based business group, said in an e-mail after the report. “There is clearly room for further appreciation, however.”

In declining to brand China a manipulator, the Treasury cited the reduced intervention and “steps to liberalize controls on capital movements, as part of a broader plan to move to a more flexible exchange-rate regime.” The U.S. hasn’t designated another nation since 1994, when it named China.

Critics of China’s exchange-rate policies, including former Republican presidential candidate Mitt Romney, say the nation deliberately suppresses the value of its currency, making its goods cheaper in overseas markets and costing jobs in the U.S.

“This report all but admits China’s currency is being manipulated, but stops short of saying so explicitly,” U.S. Senator Charles Schumer, a New York Democrat, said in a statement. “The formal designation matters because there can be no penalties without it. It’s time for the Obama administration to rip off the Band-Aid, and force China to play by the same rules as all other countries.”

Many U.S. corporations favor less confrontation as they seek access to China’s market. U.S. companies such as Apple Inc. and Wynn Resorts Ltd. make a substantial share of their sales in China, according to a Bloomberg Government analysis. Yum! Brands Inc. runs more than 3,900 KFC and 690 Pizza Hut restaurants there. General Motors Co., including through joint ventures, sold more cars in China last year than it did in the U.S.

Chinese Central Bank Governor Zhou Xiaochuan said Nov. 17 that full convertibility of the yuan will be the next step in an overhaul of the exchange-rate system. Signs that Asia’s largest economy is starting to recover after a seven-quarter slowdown is also supporting the currency.

In addressing other trading partners, the Treasury said in the report that “it remains important that Japan take fundamental and thoroughgoing steps to increase the dynamism of the domestic economy, by easing regulations that unduly deter competition.”

The Treasury said it will “continue to press” South Korea to limit its foreign-exchange interventions to “the exceptional circumstances of disorderly market conditions and to commit to greater exchange-market transparency, including through the publication of intervention data.”

Though the South Korean government doesn’t publish data on currency intervention, “market participants indicate that Korean authorities intervened on both sides of the market during the course of the year.”

The South Korean won has strengthened 5.7 percent against the dollar since the end of June, the best performance among the 11 most-traded Asian currencies.

On the euro area, the Treasury said the region’s success in the next phase of fighting its debt crisis “will hinge on rapid implementation of institutions that strengthen the euro, and continued progress on economic reforms that support growth.”

The U.S. ran a $295.4 billion trade deficit with China last year, about an 8 percent increase above the 2010 level. Allowing the yuan to appreciate would make Chinese goods more expensive for American consumers than they are now, reducing U.S. imports of the merchandise.

The yuan climbed to a 19-year high yesterday after European officials reached an agreement on Greece and on signs that China’s slowdown is nearing an end. The yuan climbed 0.05 percent to 6.2223 per dollar in Shanghai, a 1 percent premium to the daily fixing, the maximum it’s allowed to fluctuate, according to the China Foreign Exchange Trade System.

The U.S. Treasury said it would pay “particular attention” to the pace of the yuan appreciation and “press for policy changes that yield greater exchange-rate flexibility, improve transparency, level the playing field for American workers and businesses, and support a strong, sustainable, and balanced global economy.”

Because of the yuan’s appreciation, the U.S. decision not to name China a manipulator isn’t a surprise, Ted Truman, a former Federal Reserve official and assistant Treasury secretary, said in an e-mail.

“But we are still living with economic, financial and political after-effects of a decade of a very undervalued yuan,” said Truman, who is now senior fellow at the Peterson Institute for International Economics in Washington.

China revalued the yuan, officially known as the renminbi, and ended its peg to the U.S. dollar in 2005, allowing the currency to become convertible for trade purposes, giving banks more freedom to set interest rates and allowing some foreign institutional investors access to the country’s stock and bond markets.

“China’s overall trade surplus has come down while the renminbi has appreciated and is trading in both directions on a given day,” said Phillip Swagel, who was an assistant Treasury secretary under President George W. Bush and is now a professor at the University of Maryland inCollege Park. “With these changes, it is more difficult to label China a currency manipulator, especially when the Obama administration declined to name them previously.”

John Frisbie, president of the U.S.-China Business Council, said the Treasury “again made the right call. China’s exchange rate has strengthened over 30 percent against the dollar in the past several years.”

“The exchange rate has little to do with the U.S. trade balance or employment,” Frisbie said. “We need to move on to more important issues with China, such as removing market access barriers and improving intellectual-property protection.”

The president-elect of Mexico, Enrique Peña Nieto, praised President Barack Obama's immigration plan in a meeting today at the White...