In forming our opinions it is essential to have access to accurate information. In many respects the internet has broken down traditional barriers of communication. Valid criticism is levelled that this makes it difficult to authenticate facts. Nevertheless the well-worn methods of research and scholarship need not be compromised. Indeed they can be enhanced as collaborative efforts open up new areas of materials and information that were hitherto the preserve of an elite. As data moves at lightning speed it can change not just opinions but let us revise our ideas. This is especially the case where subject areas have been subject to a suffocating stranglehold. Such is the case with the study of India. 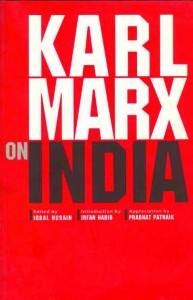 Since independence India has had its elite institutions staffed by Marxist academics. Not only do they see everything in terms of class warfare but they are inherently hostile to the very ancient culture of this land which allows them to flourish by creating atmospherics accepting of diversity and divergent opinion. One need only read Marx’s very own racist rants and how he supports colonialism as necessary to drag backward superstitious Hindus into the next stage of development which will lead inevitably to communism to understand this undying hostility.

But to expose Marx’s support for colonial rule in India is opening a can of worms greater than making plain his strident and unashamed anti-Semitism found in the ‘Jewish Question’. It is just a bit too inconvenient for those who pride themselves as supporting liberation movements, working-class rights and justice for the oppressed, all the while ignoring the mangled corpses of innocent people dismissed as ‘counter-revolutionaries’ and ‘class enemies’, as they pay their servants less than the minimum wage and ride roughshod in their chauffer-driven cars over the swarming masses.

It is these same Stalinist academics who blame every evil on the ‘capitalist west’ and especially America with its often conjoined twin of Zionism; so much so it is often hard to tell whether they are blaming America or Israel for every problem on the planet, ranging from global warming to terrorist bombings undertaken by radical Islamic groups which are as hostile to both countries as are India’s unreconstructed Marxists. Yet these ivory tower revolutionaries will ditch their red flags emblazoned with hammer and sickle in an instant just so that they can be waiting at the Statue of Liberty with a flask of tea and sandwiches should they ever have even the remotest chance of getting that much coveted prize of India’s Third World academic despots, the Green Card.

In such manner India has exported a disease almost as deadly as the cholera which ravaged Europe in the nineteenth century. Romila Thapar epitomises India’s Marxist export par excellence. While portraying herself as a social liberal Thapar uses her position to poison the American and western mind against anything Hindu, which is but a small step from her pontificating against anything western and ‘capitalist’. However she is  merely the tip of a large iceberg which is rendering the same service to Indology as the Khmer Rouge managed with urban planning in Cambodia. For example Angana Chatterji hails from Kolkotta, long the epicentre of India’s Bolshevik Revolution that never happened. By the time she left India, socialist fatherlands were a bit thin on the ground due to the collapse of the Berlin Wall, the implosion of the USSR, and the effective transition of China from Maoism into something more pragmatic by Deng Xiaoping in order to recover from the Great Leap Forward into mass starvation and the Cultural Revolution which brainwashed millions into becoming little fascist zombies. So in true Marxist fashion she headed to where she was guaranteed to get a new generation of Lenin’s useful idiots stupidly idealistic and naïve enough to listen to her dysfunctional view on life, and of course a big fat juicy pay packet. Chatterji found this at the California Institute of Integral Studies.

Unfortunately for her American students were not as quiescent as Maoism might have led her to believe. Following student complaints both Chatterji and her partner Richard Shapiro were fired in 2011. 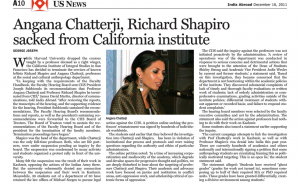 Yet the Marxist behemoth could not be stopped that easily. It was announced that on 26 November 2012, the South Asia Without Borders Seminar Series at Berkeley would feature Chatterjee to speak on:

The other line up at this pathetic exhibition of humanity at its most brainless includes Sanjeev Uprety,of Tribhuvan University in Kathmandu who will present “Neat and Laundered Middle Classes and Third Gender Nepal Communist party-United Marxist Leninist: Masculinity and Politics in Contemporary Nepal.” So while self-righteous academics like Chatterji rails against a non-existent Hindu ‘fascism’ here she is defending an ideology which by conservative estimates exterminated 100 million people in a matter of a few years.

Then again why be surprised when we find out who is chairing the event. It is none other than Michael Witzel, professor of Sanskrit and advocate of the colonialist and racist theory that white Aryans invaded India. So once again we have Marxist finding suitable cohabitation with disciples of the Aryan race theory; just as they did when Communists and Nazis joined hands to organise the violent Berlin transport strike in 1932 or when soldiers of the Third Reich and USSR were filmed swapping cigarettes, handshakes and smiles as they raped and ravaged Poland just seven years later. 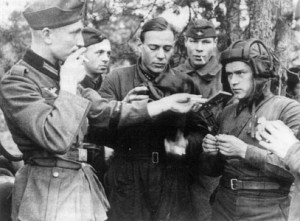 September 20, 1939. German soldiers treat Red Army soldiers to cigarettes during a meeting on the line of demarcation in Poland.

Thapar, Chatterji and Witzel have not only self-appointed themselves as the leading anti-Hindu hate advocates, but they receive taxpayers money for this privilege while they teach, and downgrade, America’s leading institutes of learning. This not only creates a warped and negative view of Hindus. It creates a needless rift and misunderstanding between the world’s oldest modern democracy of America, and the largest democracy in the world, namely India. While only a minority of Americans will ever study at Cornell or Berkeley, these Stalinist and racist guardians of the academic gulag right in democracy’s midst claim grants, stipends and other nice little comfortable gains in order to buffer themselves from actually doing a proper job and rendering any service to humanity, let alone deepen learning and understanding.

They have thus far avoided real accountability. However truth is a powerful weapon and with the free flow of ideas and information the first glimmers of sunlight are breaking through the academic Iron Curtain which the aforementioned spawn of Lenin have imposed. In India such professor types have successfully commandeered the universities in order to create replicas of themselves; walking dead zombies which churn out rote learning but without the ability to think creatively or independently.

This reflects the mimicry which is inherent when the individual is crushed by dependence on an overbearing state and its tentacle style bureaucracy for mere survival. However in the USA a vibrant civil society and deeper civic values have not allowed this type of export to go unchallenged. It is that element which will allow Indology to take its rightful place as a serious discipline cleansed of the racist, colonialist and Marxist suffocation which inhibit its development.

While the challenge will be daunting and no doubt will be laughed off by the Thapar-Witzel-Chatterji politburo, it must be remembered how just over a century ago racism and eugenics was taken as standard in the humanities. By diligent effort this was reversed and laid the foundations for ideas essential to important gains for humanity, notably the Civil Rights movement of the 1960s.

The reality of the world also makes it difficult to defend the indefensible. After all Jean-Paul Sarte was against publicising the view of Soviet dissidents such as Viktor Kravchenko because the reality of life under Stalin did not accord with the theory and propaganda being pumped out about the workers’ paradise. It would dishearten the proletariat in western democracies into realising they were not as oppressed as the masses who lived with the daily threat of being deported to slave labour camps in Siberia. Yet even  Sartre relented when he saw the plight of the Vietnamese Boat People.

The Obama administration on sill on the same old path said China isn’t a currency manipulator and made the claim that under...