After Kristallnacht, US cartoonists tried to mobilize sympathy for the plight of the Jews.FDR was not impressed and the doors stayed shut.

(Dr. Medoff is coauthor, with comics historian Craig Yoe, of the forthcoming book, Cartoonists Against the Holocaust, from which this material is excerpted.with permission.) 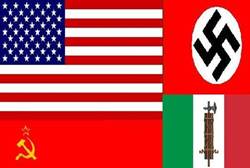 On November 9, 1938, mobs of Nazi stormtroopers unleashed an all-night hurricane of violence and destruction upon the Jews of Germany. Hundreds of Jews were beaten in the streets, and more than 90 were murdered. About 30,000 more were dragged off to concentration camps. Several hundred synagogues were burned to the ground, while fire fighters stood by, under orders from the Hitler government to act only to keep fires from spreading to property owned by non-Jews.

An estimated 7,000 Jewish business were ransacked. Kristallnacht, the “Night of the Glass” –named for the widespread smashing of windows of Jewish homes and shops– marked a turning point in the Holocaust. Anti-Jewish discrimination and expropriation gave way to systematic anti-Jewish violence.

“We heard a commotion from the street, and when we looked outside we saw a mob of Hitler Youth [the Nazi youth movement] shouting ‘Kill the Jews!’ and charging towards the entrance to our apartment building,” Mrs. Thea Press recounted when I invited her to address a class I taught at Ohio State University some years ago.

Mrs. Press, who was 11 years old at the time of the pogrom, recalled: “My father and my grandfather grabbed a heavy broom and shoved it through the inside of the door handle. I was hiding, terrified, under a table. I remember watching the door as it creaked and bent under the pressure from the crowd. But it didn’t give way.” She was one of the lucky ones.

The international response to Kristallnacht was meager. World statesmen expressed horror and outrage, but refrained from taking steps such as severing diplomatic relations with Nazi Germany, imposing economic sanctions, or opening their countries’ doors to significant numbers of German Jewish refugees.

U.S. President Franklin Roosevelt condemned the violence and recalled the U.S. ambassador from Germany for “consultations,” but rejected suggestions by some Members of Congress to break diplomatic ties with the Hitler regime. FDR extended the visitors’ visas of the approximately 12,000 German Jewish refugees who were then in the United States, but also announced that liberalization of America’s tight immigration quotas was “not in contemplation.”

As the following images demonstrate, a handful of American editorial cartoonists tried to mobilize public sympathy for the refugees and to urge practical steps to help the Jews.

Sadly, their pleas were not heeded.

The title of Henry Elderman’s cartoon in the Washington Post on November 13, 1938 alluded to Adolf Hitler’s book, Mein Kampf.

Edmund Duffy’s cartoon in the Baltimore Sun on November 13, 1938 referred to a statement by Nazi Propaganda Minister Joseph Goebbels that the violence was an example of the German people “following its healthy instincts.” Duffy won the Pulitzer Prize for cartooning three times.

Hugh Hutton, in the Philadelphia Inquirer on November 16, went a step further than general sympathy for Hitler’s victims: he took aim at European leaders who advocated appeasing Hitler, such as British Prime Minister Neville Chamberlain.

Some cartoonists emphasized that sympathetic words were not sufficient: the international community needed to lend a helping hand. , Those included Herbert Block, for the NEA syndicate, on November 19. (Block later served as cartoonist for the Washington Post for more than 50 years and won the Pulitzer Prize three times.) and Paul Cormack, in the Christian Science Monitor on November 16.

Examples of the cartoons can be found by following the source link below.

New York Times Redefines the Word Journalist November 26, 2012 14:49 by Alex Margolin After years of working for the...