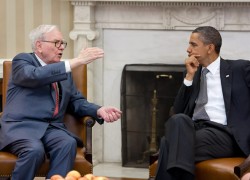 As the fiscal cliff approaches, Congress and President Obama continue to debate tax increases, even though spending is the problem. Investor Warren Buffett recently opined that tax hikes on the wealthy would not curtail investments or hurt the economy. His logic, like President Obama’s, assumes that incentives don’t matter.

Oh really? News that Great Britain saw its number of millionaires decline by two-thirds due to a steep top tax rate tells a different story.

No single reason explains the drop. Some millionaires probably earned less money due to the slow-growing European economy, or they may have simply worked less. Others may have shifted the timing of their income or moved it to less-taxed forms. Still others might have physically left the country.

Here’s the bottom line: All these reasons are economically important and show that incentives matter.

That fact is so obvious it’s hardly newsworthy. When faced with a tax increase, Britain’s millionaires readily “voted with their feet.” Whether they actually fled the country or not doesn’t really matter. But the fact that their productivity level changed—and in such a drastic way—does.

As for Buffett’s claim that investors don’t change their decisions based on tax rates—who does he think the people who left Britain are? They are highly productive people who earn high incomes and invest their earnings. High earners are the most able to respond to changing incentives, and their response to a tax increase was loud and clear. Their change in behavior means there will be less investment in Great Britain and, therefore, fewer jobs.

America had better listen up. Highly productive workers here at home would respond to the incentives under Obama’s tax hike policy, which has a top tax rate of over 40 percent, factoring in the return to pre-Bush tax cut rates and the hospital insurance payroll tax rate increase in Obamacare.

Upper-income earners would certainly shift their income; they would also have less incentive to work more hours knowing that over 40 percent of their additional earnings would go straight to Washington—even before their state and local governments get into the act. What does Buffett think will happen to investment when these peoples’ incomes plummet and they have less to invest?

California’s unfriendly business climate also proves the point. In 2011, 254 companies took some or all of their businesses out of the state, a 26 percent increase from the previous year. This November, Californians approved a “temporary” income surtax on people making more than $250,000, as well as a sales tax increase. Such tax hikes will hardly compel businesses and investors to stick with the Golden State and may continue having the opposite effect.

Growing cities in low-tax states, such as Austin, Texas, will cheer the news, as they’ll continue to welcome refugees from California’s punishingly high taxes—especially high-skilled workers and cutting-edge tech companies.

Taxes do matter, because investors respond to incentives. Hardly surprising, but a good reminder—one that President Obama should heed.

After Kristallnacht, US cartoonists tried to mobilize sympathy for the plight of the Jews.FDR was not impressed and the doors...