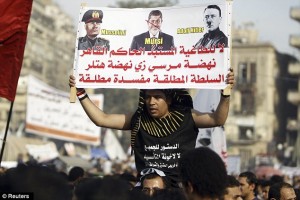 They also said the Muslim Brotherhood is paying gangs to beat up men who are taking part in the latest round of protests, which followed a decree by President Morsi to give himself sweeping new powers.

It comes as the Muslim Brotherhood co-ordinated a demonstration today in support of President Mohamed Morsi, who is rushing through a constitution to try to defuse opposition fury over his newly expanded powers.

Large marches from around Cairo flowed into the square, chanting ‘Constitution: Void!’ and The people want to bring down the regime.’

But amid the calls for democracy a sinister threat has emerged.

Magda Adly, the director of the Nadeem Centre for Human Rights, said that under Mubarak, the Government paid thugs to beat male protestors and sexually assault women.

‘This is still happening now,’ she told The Times. ‘I believe thugs are being paid money to do this … the Muslim Brotherhood have the same political approaches as Mubarak,’ she said.

One protestor, Yasmine, told the newspaper how she had been in the square filming the demonstrations for a few hours when the crowd suddenly turned.

Before she knew what was happening, about 50 men had surrounded her and began grabbing her breasts. She said they ripped off her clothes, starting with her headscarf and for nearly an hour, indecently assaulted her with their hands.

A few men tried to help her but they were beaten away. Eventually some residents who had seen the attack from their windows came to her aid and an elderly couple pulled her into their home. She suffered internal injuries and was unable to walk for a week.

Four of Yasmine’s friends were also sexually assaulted in the square that day, in the summer.

Afaf el-Sayed, a journalist and activist, told the newspaper she was assaulted by a group of men while protesting in Tahrir Square just over a month ago and she was sure her attackers were ‘thugs from the Muslim Brotherhood’.

In February 2011 the correspondent for the American network CBS, Lara Logan, endured a half-hour sexual assault in Tahrir Square by a group of men. She said after the ordeal that she had been ‘raped with their hands’.

While the exact frequency of these attacks is unknown, activists have reported nearly 20 attacks in the last ten days and say there has been a dramatic increase in mob sex attacks on protestors in the last year.

Most attacks take place in one particular corner of the square, at roughly the same time every evening, and usually starts with a group of men forming a human chain around women as if to protect them.

Yasmine said she was almost sure the assault was planned. She managed to throw her camera to a friend and was able to watch the footage later. She told The Times: ‘Just before the attack it looks like men are getting into position. They look like they’re up to something, they don’t look like random protestors.’

The newspaper spoke to two men who admitted they were paid to target female protestors. Victor and Tutu, both in their thirties, said they operate in a group of around 65 local men and got paid between £10 and £20 a time. But they would not reveal who pays them.

‘We’re told to go out and sexually harass girls so they leave the demonstration,’ Victor told The Times. He said the aim was to cause disruption and instil fear in protesters. He said members of the public sometimes joined in.

Protestors in Tahrir Square yesterday angrily vowed to bring down a draft constitution approved by allies of President Morsi.

Are we still a center right country?

BY: JOSH BERNSTEIN America was founded on Judeo-Christian values. Those values are written in freedom’s blood in our Constitution. Our...