Hours before the United Nations General Assembly voted in favor of recognizing the Palestinian Authority as a non-member observer state, the official U.N. Twitter account made an egregious typo, tweeting in favor of a one-state solution. 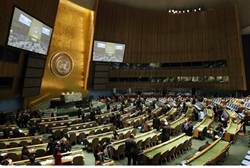 The message, which stayed online for more than 30 minutes, went out to the UN’s over one-million Twitter followers before being promptly taken down and replaced with a corrected version, which read: “On Day of Solidarity w/ Palestinians, Ban Ki-moon stresses urgency of reaching 2-state solution (corrected tweet).”

U.N. Secretary-General Ban Ki-moon has long stressed the need for a two state solution to end the Arab-Israeli conflict and bring peace to the region.

“Sorry all,” she wrote, “terrible typo on my part and then went into a telephone conference call before catching it.”

The Daily Caller reported that a U.N. spokeswoman initially blamed a hacker for the tweet.

“A nerd – they can do just about anything,” the spokeswoman allegedly told the news site.

“I did it,” Groves reportedly said. “It was my personal fault, and did not mean to suggest anything other than support for a two-state solution.”

One Twitter user dubbed the ill-timed error a “typo of epic proportions.”

In Case You Missed It:  The Start of the Unraveling of the Trump Mar A Lago Raid
Posted in Israel, Terrorism and tagged Freedom, Islam, Israel, Jihad, Palestinians, Terrorism, United Nations.

Next Step for Hamas-PA Unity: Terror

Palestinian Authority Chairman Mahmoud Abbas’ Fatah movement is marching hand-in-hand with Hamas, which has offered the movement, founded by Yasser...