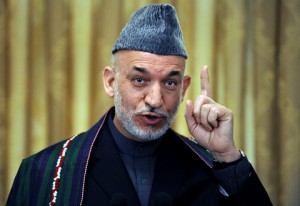 Afghan President Hamid Karzai sharply criticized the United States in an exclusive interview with NBC News on Thursday, blaming American and NATO forces for some of the growing insecurity in his country.

“Part of the insecurity is coming to us from the structures that NATO and America created in Afghanistan,” Karzai said during a one-on-one interview at the presidential palace.

Karzai, who is serving his second five-year term, also told NBC News that he had sent a letter to President Barack Obama saying that Afghanistan would not sign any new security agreements with the United States until hundreds of Afghan terrorist held in U.S. custody be transferred to Afghan authorities.

His criticism of the United States, Afghanistan’s most important ally, has come after the start of complex bilateral talks on a security pact on the role the United States would play after Obama disclosed that most of the US troops will be withdrawn by the end of 2014.

Karzai said the inmates (terrorist) in American detention in Afghanistan were being held in breach of an agreement he and Obama signed in March and must be handed over immediately.

The dispute between the two countries centers around Bagram Air Base and a nearby detention facility, which have long been seen as a symbol of American impunity and disrespect by many Afghans.

“I have written to President Obama that the Afghan people will not allow its government to enter into a security agreement, while the United States continues to violate Afghan sovereignty and Afghan loss,” he said.

Karzai, the corrupt piece of $!#% that he is won’t last a month when the USA leaved, so we wont ever completely leave.  I say give him his wishes and the US leaves Afghanistan,  wish Karazi the best, we can all watch the horror from afar on CNN.

In Case You Missed It:  Why Juneteenth Is a Uniquely American Holiday
Posted in Terrorism and tagged Afghanistan, NATO, Obama, Taliban, Terrorism, United States.

Was George Bush Correct After all on Iraq’s WMD’s?

Bush used CIA and Russian intelligence to come to the conclusion Saddam Hussein had weapons of mass destruction also called WMD.  During...