The Muslim Brotherhood has replaced Hosni Mubarak, but an inside look at Egypt’s torture chambers reveal that they remain the same despite the Obama administration’s attempt to make Egypt safe for democracy. 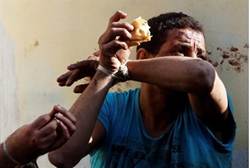 An injured protester who has been detained, eats with his hands bound

At least two things have not changed: Violence and protests.

The Egyptian Al-Masry Al-Youm newspaper, with the help of a Brotherhood-owned television station, was given a rare tour of the torture chambers by the Muslim Brotherhood, which does not allow anyone to access the compound without its own permission. The report was translated and published by the Al Monitor website.

During a three-hour visit, the newspaper’s reporter revealed, “Protesters suspected of working against the Muslim Brotherhood are tortured and beaten with the knowledge of the police before being handed over for formal detention at a site just outside the presidential palace in Heliopolis.”

Bearded Muslim Brotherhood police and security officials, some in civilian clothes and some in military uniforms, supervise 15 bearded men who carry out whippings and beatings of demonstrators arrested for opposing Egyptian President Mohammed Morsi.

After the violent suppression of protesters by Mubarak’s regime, Morsi was swept into power in a democratic voted heralded by President Barack Obama as a new age of democracy for the Middle East.

Morsi announced two weeks ago he was giving himself new and exclusive powers as he presented a new Egyptian constition based on Sharia law, sparking the same kind of protests and violent suppression that marked the end of the Mubarak regime.

Inside the torture chambers, protesters or even one who is suspected of opposing the Muslim Brotherhood are punched, kicked and beaten with a stick over their entire body.

The torture was carried out before the eyes of the Egyptian newspaper’s reporter, and the Brotherhood allowed him to witness it so that he would report the beatings and instill fear into protesters.

“They tear off his clothes and take him to the nearest secondary torture chamber, from which CSF [Central Security Forces -ed.] personnel, members of the Interior Ministry and the State Security Investigations Services (SSIS) are absent,” the journalist reported.

“It is hard to determine how many locations there are, given that the torture chambers are established as near as possible to where a person is arrested. Before the interrogation process starts, they search him, seize his funds, cellphones or ID, all the while punching and slapping his face in order to get him to confess to being a thug and working for money.

“They ask him why he took to the street, whether he got paid to take part in the protest and whether he supports Mohamed ElBaradei, founder of the Constitution Party, or Hamdeen Sabahi, founder of the Egyptian Popular Current or the dissolved Egyptian Nationalist movement. As long as this person denies the allegations, they beat him and insult his parents.”

Beatings continued while the victims were transported from the secondary torture chamber to the central one. Many of the prisoners were unable to answer questions after severe beatings, and they were not given medical aid despite bleeding over their entire bodies.

Once the protesters are handed over to the police, the Muslim Brotherhood thugs fall out of the picture.

“We left the place and found blood flowing on the sidewalk of the palace,” wrote the Al-Masry reporter. “Someone had tried to cover the blood with soil to remove it. However, no one will be able to clean the image of this blood from the memory of Egyptians for hundreds of years.”

FremantleMedia, one of the leading creators of television entertainment brands worldwide, is teaming up with veteran writer and producer, Marshall...