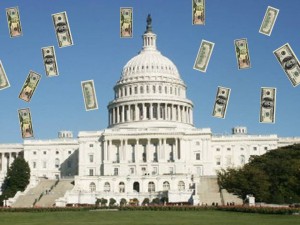 “We make some tough spending cuts on things that we don’t need; and then we ask the wealthiest Americans to pay a slightly higher tax rate. And that’s a principle I won’t compromise on.”

At yesterday’s fiscal cliff campaign stop in Redford, Michigan, President Obama delivered these remarks and hammered away at his “balanced” plan to avert the fiscal cliff. Balance, as defined in the President’s plan, consists of $4 in tax increases up front for every $1 in loosely defined spending cuts promised down the road. The balance scale at the White House, it seems, needs to be recalibrated.

Obama’s plan misses a crucial point: Washington does not have a problem of too little revenue. Its problem is too much spending. Though revenue has decreased during the recession, the nonpartisan Congressional Budget Office projects that revenues will return to their normal historical level once the economy fully recovers. Spending, however, is out of control. Instead of debating any variety of tax increases—hiking rates or limiting deductions—Congress and the President should be reducing spending. They can start with entitlement program reforms.

Raising taxes on more affluent Americans and businesses, as Obama’s plan would do, would not generate enough revenue to close our massive deficits. Doing so would require mathematically impossible tax rates. Any such attempt would also seriously hurt the economy and jeopardize job creation.

What if you stretched Obama’s version of balance a bit further, though, and let all current tax policy expire? Such massive tax increases—ignoring the certain economic damage that would occur—would STILL not balance the budget. Entitlement program spending would continue to rise dramatically, soaking up all available revenue and driving deficits deeper. (continues below chart)

Not even Obama is proposing this idea outright, but by virtue of Obama’s insistence on tax increases and unblushing silence on entitlement program reforms, he is leading the nation down this path.

A responsible solution exists to avoid the fiscal cliff without harming the economy. Bipartisan entitlement program reforms also exist that can begin to solve the country’s real fiscal crisis. President Obama insists on taxing his way to prosperity, dealing a blow to capital, investments, and small businesses. The only trouble is that he’s forgetting—or ignoring—that spending is the problem.

Elected Islamists Are Worse Than Dictators