On 4 December 2012 six year old Vijanti Meghwar was brutally raped in Ghulam Nabi Shah village, district Taluka Pithoro Umerkot, in the Sindh province of Pakistan. Vijanti belongs to the Meghwar community of the country’s minority Hindu population. She was found unconscious and lying in the street. Such a heinous crime was made easier by the fact that the Meghwars are impoverished Hindus and therefore powerless and helpless against mass intolerance and bigotry in a state where Islam is the state religion and non-Muslims are legally denigrated as subhuman third-class citizens: dhimmis and kuffar.

Now the persecution of religious minorities in fundamentlaist Islamic Pakistan is nothing new. Violence and atrocities against the minority population of Sindh has continued for many years but the Hindu minority are increasingly being treated worse than animals. Kidnapping of their girls and sexually assaulting  innocent children has crossed all bounds of humanity, made easier by the ‘untouchable’ status which these powerless Hindu minorities are forced to exist under and Islamic regime and at the mercy of Islamic forces. Journalists attempting to report the story of Vijanti have also been threatened. Under these circumstances is it any surprise that the persecution of Hindus in Pakistan rarely gets reported? Jihad mentality permeates daily life.

Pakistan receives substantial aid from British and American taxpayers, money which is being used to effectively ethnically cleanse the country of its indigenous minorities with total impunity. Only the day before Vijanti was raped, property developers razed a Hindu temple in the Doli Khata area of Karachi. This is jihad literally at the street level and as language of the gutter.

The tragic case of Vijanti is therefore not an isolated phenomenon. In February 2012 over 200 Hindus fled Pakistan after 19-year old Rinkle Kumari was abducted her village Mirpur Mathelo in Ghotki province of Pakistan, and subsequently forcibly converted and forcibly married. Her abductors had powerful political connections and after two months the country’s supreme court ruled against her parents. Kidnappings, rapes, forcible conversions and constant harassment are therefore a daily routine for Hindus who dare to remain in their homeland of Pakistan and suffer the humiliation of being third class citizens and subhumans in the eyes of the majority and legal system 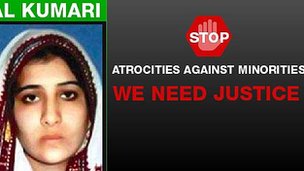 Yet the world averts its gaze at these atrocities.  Where are the international denunciations? Where are the protests? Is there silence with regards to Vijanti Meghwar and Rinkle Kumari simply because they are an inconvenient eyesore in the dogma of political correctness because they are Hindus who force an unwilling reality on those that continue to brainwash the masses on the religion of peace using front groups such as CAIR? Uncomfortable questions indeed but they need to be asked in the face of global apathy. As the caliphate takes shape in the Middle East, it is Pakistan which will be the template for the burgeoning Islamic states behind the Iron Burqah. It is a portent that none of us can afford to ignore.
In Case You Missed It:  Climate cult wants every person’s carbon dioxide emissions to be regulated â€“ no more breathing … for the planet!
Posted in Freedoms, Terrorism and tagged Hindus, Islam, Pakistan.

“We make some tough spending cuts on things that we don’t need; and then we ask the wealthiest Americans to...