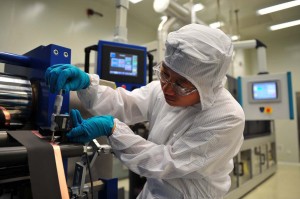 China’s largest auto-parts maker just won the bidding for A123 Systems, the bankrupted electric car battery company. It’s time to back the car up and remember where the American taxpayer started with A123.

A123 received a $249 million grant as part of the 2009 stimulus. By the time it went bankrupt in October 2012, the company had spent $133 million of the federal grant, along with $141 million in Michigan grants and tax credits. The business was a quick and clear failure. But now that Wanxiang America has won a $256.6 million bid for the failed company, some lawmakers suddenly have a more favorable view of A123.

Both competitors of Wanxiang and political opponents of the deal have expressed national interest concerns over technology transfer. They attest to the value of the company with the fact that the Chinese bid is nearly two times the lost portion of the federal handout, as if China’s willingness to overpay proves something is valuable.

A123 sells commercial battery technology, not technology related to national security. And its market value has proved minimal, obviously, not only by the October bankruptcy but also by Wanxiang’s low bid, which rival American bidders were unwilling to top. The offer is still millions of dollars short of what the company owes to lenders.

Critics of Wanxiang’s acquisition can be forgiven because there is a problem at the root—federal intervention in the market. While expressing disapproval of the Chinese bid, Senator John Thune (R–SD) said, “President Obama’s energy policy has been a win-win for China and a lose-lose for the American taxpayer.”

In Case You Missed It:  In America, the System Trends Toward Justice

He’s at least half right: The federal government played capital investor, lost out on A123, and is now left to protect taxpayer investments in a bankruptcy settlement. Whether A123 was a renewable or conventional energy company, an utter failure or market success, the government has no business picking out companies for its blessing.

Is there a better way to stimulate the economy than federal loans, grants, tax favors, and other subsidies? Yes: Let investment occur freely. In this case, if there had been no federal money, it is likely A123 would have received capital from Wanxiang or another investor. There might not have been a bankruptcy court involved, and there would certainly not have been taxpayer money lost.

The green energy sector has struggled mightily. But if Wanxiang can squeeze value from a risk no U.S. company is willing to make, they should be rewarded. That’s free enterprise, and that’s what drives the American economy.

The lesson the federal government should draw from this sale is to begin retiring current energy subsidies and preventing new ones.

Your Opinion Needed for the State Department

The State Department wants your opinion. No, not on weighty matters like the Arab Spring/Winter, relations with Russia, the...