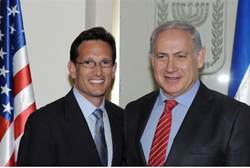 Jewish representation in the next Congress will drop by nearly 20 percent, the second consecutive time fewer Jews were elected.

Although the number of Jews voting Republican presidential candidate Mitt Romney jumped 50 percent, from 22 percent to 33 percent, it was far from enough to defeat President Barack Obama.

Romney and other losers discovered that supporting a strong Israel is a burning issue only for a minority of American Jews, most of whom are traditionally liberal and more concerned with domestic issues than with calling for a halt to American aid for a Palestinian Authority that has announced it is reuniting with Hamas, which the United States has designated an outlawed terrorist organization.

Non-Jewish Florida Republican Congressman Allen West lost his seat by a tiny margin and joins seven Jewish Congressmen who will be out of the Capitol when the next Congress takes office in January. His loss also was attributed to his affiliation with the conservative Tea Party faction, which preaches non-liberal views.

An apparent trend in less Jewish representation and less attention paid to Jewish tradition was highlighted in the lighting of the National Menorah for Hanukkah on Sunday.

ABC News reported that unlike previous years, “No major political bigwigs showed face at the high profile event marking the beginning of the holiday season.”

Jews make up only 2 percent of the adult Jewish population but always have been active and successful in politics, with Jews comprising 6 percent of both houses of Congress.

The number dropped to 39 in the last Congress, and next January, there will be only 33 Jews in Congress, all of them Democrats except for Republican Majority Leader Eric Cantor and Independent Sen. Bernard Sanders of Vermont.

A Pew Forum analyst told the Forward that he cannot say whether the change in Jewish representation is statistically significant, but the liberal Jewish newspaper suggested that the decline relates to a general shift of Jews away from the Northeast, which hosts large Jewish population centers, and to states such as Utah and Arizona, where Jews are less dominant. Arizona elected Sen. Kyrsten Sinema, a radical anti-Israeli woman who also is a lesbian.

Official logo celebrating Fatah's 48th anniversary includes map that shows all of Israel as "Palestine" by Itamar Marcus and Nan...