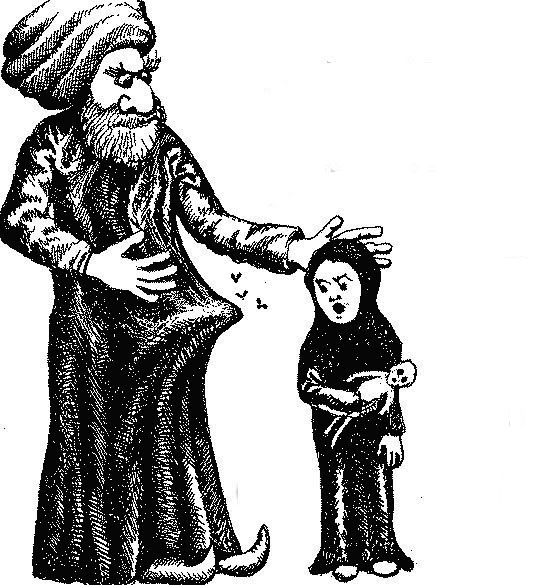 Mohammad the founder of Islam married a 6 year old child when he was 52 year old, setting this bad example to his Muslim followers.

A new Army manual that warns American soldiers in Afghanistan to avoid talking about certain topics has unwittingly acknowledged that Western taboos such as pedophilia are an inherent part of Islamic culture.

“By mentioning that pedophilia and women’s rights and saying that soldiers should not mention such things they are tacitly admitting that those things are indeed part of Islam,” said Robert Spencer, founder of Jihad Watch.

According to the Wall Street Journal, a new 75-page Army manual suggests U.S. soldiers are to blame for the large number of deadly attacks on them by Afghan security forces. The manual reportedly says the soldiers may have brought the attacks on themselves because of insensitivity towards Islamic culture.

“Many of the confrontations occur because of [coalition] ignorance of, or lack of empathy for, Muslim and/or Afghan cultural norms, resulting in a violent reaction from the [Afghan security force] member,” the draft report prepared by Army researchers and obtained by the Journal said.

Clare Lopez, a senior fellow with the Center for Security Policy, said the suggestion that U.S. soldiers are to blame for the attacks on them by Afghan security forces is outrageous.

“To suggest that our troops are somehow being murdered because of our insensitivity to their culture is essentially saying it’s our own fault that the troops are being killed because we weren’t nice enough to them,” Lopez said. “The fundamental refusal to acknowledge that the enemy fights because of what he says he fight for, which is Islam, is a failure by our professional leadership from Secretary of Defense Leon Panetta on down. Because of this, we have no strategy.”

This year alone, more than three dozen attacks have killed 63 coalition forces. In an attempt to quell the attacks the Army report has issued a list of “taboo conversational topics.”

The topics include “making derogatory comments about the Taliban,” “advocating women’s rights” and “directing any criticism towards Afghans” or “anything related to Islam.”

WND contacted the Army to request a copy of the manual. Army spokesman Ray Harp responded by saying it would not release a copy, for security reasons. He explained the Army wished to avoid detailing specific tactics, techniques and procedures outlined in the handbook.

Regarding the WSJ copy, Harp said whoever released it was not authorized to do so.

“While the handbook does contain information we do not want freely distributed into the hands of our enemies, it is labeled with the ‘For Official Use Only’ restriction,” Harp said. “While still officially unclassified, we require the information to be protected from an open distribution and it should not have been released to anyone outside of those who needed access to it for official purposes.”

Elaine Donnelly, director of the Center for Military Readiness, says while she has not seen the draft copy, she can understand how it is beneficial for the Army to help teach soldiers about cultural differences. Unfortunately, she said, Congress and military leaders often go too far.

“There is a cultural problem that the military needs to confront, but I’m not sure this manual is the best way to go about it,” Donnelly said. “If the information in it is for our soldier’s protection so as to prevent something from being provocative, it might save a life, but if as the article suggests it is calling for soldiers to be overly deferential, that’s not called for.”

Donnelly noted the example of Navy Lt. Florence Choe, who was shot by an Afghan guard in 2009 for wearing shorts while jogging along the perimeter of the base.

“I’m not saying this was her fault, but if her commanders had taken the time to acknowledge that individuals in that part of the world have a different attitude in regards to women in shorts, it might have saved her life,” she said.

However, Donnelly says there are other taboos supposedly in the report that appear to have gone too far.

The Army manual also advises soldiers to avoid “any criticism of pedophilia” or “mentioning homosexuality and homosexual conduct.”

“In that part of the world homosexuality is condemned, and pedophilia is accepted. It’s not like our culture at all and that needs to be acknowledged. We don’t have to be subservient to be cautious,” she continued. “Unfortunately, often times our leaders want to go overboard, believing it will help our relationships with these countries, but the truth is it doesn’t.”

The Army manual has drawn sharp criticism from Marine Gen. John Allen, the top military commander in Afghanistan. Allen reportedly has rejected a proposed foreword written by the Army using his name.

“Gen. Allen did not author, nor does he intend to provide, a foreword,” Col. Tom Collins, a spokesman for the U.S.-led coalition in Afghanistan said. “He does not approve of its contents.”

Spencer says the ban on criticizing pedophilia has put the military in a difficult position. By attempting to show cultural sensitivity, it is forced to acknowledge that pedophilia is an inherent part of Islamic teaching.

“This draws attention to the fact that despite denials by the U.S. government and groups like CAIR, these things are a part of official Islam,” Spencer said. “However, I don’t expect them to have the honesty to acknowledge the inconsistency.”

He said that by telling soldiers not to speak against pedophilia, the military and the U.S. government is essentially endorsing the behavior.

“We are essentially sending the message that the United States endorses pedophilia by refusing to speak out against it. I don’t see any way around this.”

Clare Lopez, also a senior fellow with the Clarion Fund, said the new manual is another example of how the military is sending the message that Western culture and values are subservient to Islam.

“It’s another step in a process of submission to the appeasement of Islam that the United States leadership including military leadership has been pursuing for quite a while,” she said. “The entire program seems to be geared to appeasing the Taliban and jihadists by giving in to their world view which says Islam should not be offended and letting them decide what is offensive.”

She said the problem is not limited to the Obama administration but began in Afghanistan under President George W. Bush.

“This actually began in 2004 when we helped Afghanistan enshrine Islamic Shariah law in the constitution. Once we did that, we no longer had any purpose being in the country because we gave the enemy everything they asked for,” she noted. “That’s what they fight for, the imposition of Shariah. All of these other measures that followed from that point on have been a further attempt to win their hearts and minds. It hasn’t worked as is evident by the fact they are still killing our soldiers.”

The Army manual is in keeping with policies by the Obama administration to deliberately scrub all training materials that criticize Islam. Earlier this year, the FBI destroyed all of its materials that taught there was an Islamic connection to terrorism.

WND previously reported the Pentagon refused to give assurances that soldiers who burned the Quran would not be turned over to Afghan authorities to face trial.

Cmdr. William Speakes, a spokesman for the Pentagon, said: “It would be premature to speculate at any potential outcomes. Any disciplinary action if deemed warranted will be taken by U.S. authorities after a thorough review of the facts pursuant to all U.S. military law and regulations and in accordance with due process. We have made no commitments beyond that.”

When asked if that meant the only commitment officials were willing to make was that the soldiers would not be tried in an Afghan court, Speakes said: “No. The only commitment we have made is that we will take any appropriate disciplinary action deemed necessary by the investigation. Any suggestions that we have made more detailed commitments beyond what I just told you is inaccurate.”

Spencer said the Army manual sends the message to Middle Easterners that despite statements by our government, they cannot expect any help from America when it comes to fighting for basic human rights.

“Anybody in these Muslim countries that wanted to see freedom of speech, a crackdown on pedophilia, or rights for women were disappointed at the time that we endorsed the Afghan constitution which enshrined these principles in Islamic law,” Spencer said. “It sends the message to advocates of human rights and freedom that the United States is not going to help them and they are on their own.”

All six adults killed at the school were women. Of the 20 children who were shot to death, eight were...