A teenager from the Israeli Arab city of Taibe has been indicted for the terrorist bombing of a Tel Aviv bus last month. At least 26 people were injured in the blast. 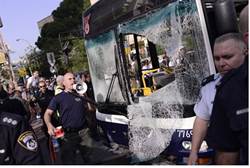 According to the court papers, Mohammed Mufarji stepped aboard Dan bus #142 the day after his 18th birthday with several bombs in his bag as it traveled through the city on the final day of Operation Pillar of Defense.

After planting the explosives, Mufarji continued on his way to work, activating one of the explosives via a cell phone about ten minutes later as the bus reached Shaul HaMelech Street, opposition the Kirya military base, the indictment alleged. After the explosion, he boarded a train from Tel Aviv to Modi’in, arriving at the McDonald’s restaurant where he worked at about 2:00 p.m.

A student at Bir Zeit University near the Palestinian Authority capital of Ramallah in Samaria (Shomron), Mufarji had spent the prior two months living at his uncle’s home in Beit Lakiya, according to the court papers.

During Israel’s counter terror operation to silence the rocket and mortar fire aimed at southern Israel, the young student allegedly told grocery store owner Ahmed Moussa he wanted to join the Hamas terrorists in Gaza. Moussa told Mufarji to return later so he could “guide” him on how to fulfill his desire – and asked the student to leave a bag with the bombs wrapped in clothing on a bus as his first test.

In an effort to ensure the next generation is equipped to identify and respond to anti-Semitism, the Anti-Defamation League (ADL)...