Several young Jewish women have leveled serious accusations against Border Police officers in Jerusalem. The young women say that police wrongly detained them as an Arab mob gathered, then left them to face the mob alone. 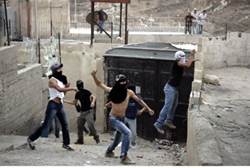 The women say they managed to escape, but were hit by Arab men as they fled.

The incident began as 15 girls left a conference on the topic of ascent to the Temple Mount and decided to go pray at the gates of the Temple Mount. Border Police officers quickly began following them, they said.

When they stopped to pray at the Lions’ Gate, they were told, “This isn’t the time or place to pray.” The young women say they listened, and began to leave, but found themselves under attack as four Arab men drove up and began to curse them and attempt to physically assault them.

When officers came to see what the problem was, the women related, one of the Arab men falsely accused the Jewish girls of having sprayed him with tear gas. Police apparently believed the man’s story, and insisted on detaining the entire group of girls until a guilty party could be found.

As police looked for an attacker among the girls, a large crowd of Arab youth and men began to gather. The women say the Arabs began to attempt to physically attack them despite the presence of police.

As tension mounted, the Arab man who had accused the girls of attacking him pointed at one young woman and named her as the attacker. She was arrested. The officers, apparently noting the potential for mob violence, yelled at the remaining young women to “get out of here” – and then, the women say, left them to fend for themselves.

The mob hit them as they raced for shelter, they reported. The young woman who was accused of attack was detained by police for several hours and questioned, but was ultimately released without charge.

Border Police spokespeople have yet to respond to the accusations.

The Honenu legal rights group had harsh criticism for the officers’ behavior. “Everything they did was wrong, from the ban on prayer at the site, to the arbitrary detention, to abandoning [the women] to the mob,” the group charged.

“As usual,” Honenu’s attorneys added, “the arrest itself was completely pointless at best, and criminal harassment at worst.”

Too often, government policies designed to ameliorate a general problem merely benefit a special interest. A case in point, highlighted...