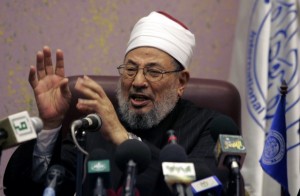 Dr. Yusuf al-Qaradawi—one of the most influential Islamic clerics in the world, author of over 100 books on Muslim doctrine, head of the International Union of Muslim Scholars, and spiritual leader of the Muslim Brotherhood—maintains that Muslims must obey the commands of Islam’s prophet Muhammad, even unto murder.

The Muslim brotherhood is the group Obama gave control of Egypt to.  Qaradawi made this declaration  on his popular Arabic program, Al-Sharia wa Al-Haya (“Sharia and Life”), broadcast by al-Jazeera to an estimated audience of 60 million Muslims worldwide.

Towards the end of the show, the host asked Qaradawi what he thought about the fact that Sheikh Ahmad Hassoun, the grand mufti of Syria, had earlier said to an American delegation:  “If [Muslim prophet] Muhammad asked me to reject Christianity or Judaism, I would have rejected him.” Visibly agitated, Qaradawi erupted as follows:

No scholar of Islam or even average Muslim would ever say such words.  If you believe that Muhammad is the messenger of Allah, then you must obey him—for he does not command except that which is good.  So, even if he tells you to kill, you must— … The story about our prophet Musa [Moses], when al-Khidr killed the boy and Musa said “you killed and you did!” But then he [Khidr] revealed why he killed the boy, and why he punctured the boat.  So we cannot distort the facts in order to please the people.  Let the people be satisfied with the Truth [Sharia teachings], not the false.

Brief facts about real situation in Bosnia during the war and things that led to so call "Srebrenica Massacre". Pointing...