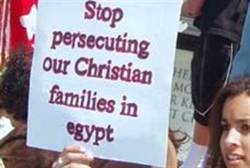 When Secretary of State Hillary Rodham Clinton visited Egypt last July, she was met with widespread protest from Coptic Christians and secular activists objecting to what they all believed was the Obama administration’s role in helping the Muslim Brotherhood (MB) ascend to power in Egypt.

The secretary asked to meet with 10 Christian leaders, myself included. All of those invited refused to meet with her and boycotted her visit. Most of us had been both publically and privately warning members of Congress and the administration of the danger the Muslims Brotherhood poses and about their desire to turn Egypt into a theocratic Islamic fascist country. Yet we were ignored.

Going back to April 2007, Democrats made special efforts to link up with the MB when visiting then-House Majority Leader Rep. Steny Hoyer, D-Md., met with Saad el-Katatni, the MB’s parliamentary leader, at former U.S. Ambassador Francis Ricciardone’s home, at a time when then-Secretary of State Condoleezza Rice has publically refused to meet with the Brotherhood.

Mr. Ricciardone, who I can call a friend, once told me that his friendship with another MB leader, Essam El- Erian, extended for close to 30 years. Perhaps that was the catalyst for this meeting and subsequent meetings that took place at his residence.

A stream of meetings, as well as public and private contacts, followed between current U.S. Ambassador Anne Patterson and Brotherhood members since her arrival in Egypt shortly after the revolution. The ambassador seemed to favor the Brotherhood and the hard line Salafis over the rest of the secular players in Egypt.

In fact, she has turned down requests for meetings from heads of political parties and other secular politicians, myself included, who oppose the Brotherhood. 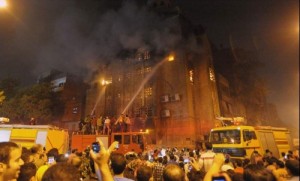 Other U.S. officials such as Deputy Secretary of State William Burns and Sen. John Kerry made the pilgrimage to MB headquarters and made sure to meet with their shadowy influential leader, Khairat El-Shater, at times even publicly praising him Kerry did. Those visits were made during a time where no political group had emerged as a leader in post-revolution Egypt.

The MB used these high-level meetings to tell the Egyptian people that the U.S. is supporting them and does not object to their rule. Many of us reached out to U.S. officials at the State Department and complained that the U.S. policy regarding the MB was putting the secular forces in Egypt at a disadvantage because it seemed to be propping the MB, but our concerns were dismissed.

We warned of the MB’s desire to impose Sharia law once in power and the grim effect it would have on the rights of the millions of Christians and moderate Muslims, and on women and children, yet all of our warnings were dismissed. It seems that a policy decision was made to bring the MB to power in Egypt at all costs, and it happened.

After less than six months in office, President Mohamed Morsi issued an edict exempting his decrees from judicial review, and he is now forcing Egyptians to vote on a constitution that would impose Sharia law, violate human rights and religious freedom of Christians, degrade women, regulate child labor and kill the tourism industry for violating Islamic Sharia.

Youth and large portions of the Egyptian population responded to the president’s new powers and draft of the constitution by taking to the streets and surrounding the presidential palace in protest.

Morsi then sent his own armed militia to attack the protesters with numerous weapons including shotguns, swords and firebombs.

The Brotherhood militia killed 10 people, wounded hundreds and kidnapped top youth activists, and tortured them inside the presidential palace for two days before turning them over to the police.

As the Supreme Constitutional Court was poised to dissolve the constitutional assembly, Morsi again sent his Muslim Brotherhood and Salafi militias to besiege the courthouse and prevent the judges from entering the building.

Upon arrival, the judges were turned away by the militia after their lives had been threatened, and to this day the militias are still surrounding the courthouse preventing the judges from meeting.

The president wanted to prevent the court from dissolving the assembly until after he pushes the referendum through and the constitution becomes effective.

Morsi again sent his armed militia to burn down the opposition Al-Wafd Party headquarters in response to the opposition and media stepping up their protests and criticism of the constitution, which large numbers of Egyptians reject and view as a setback for freedom.

They demolished cars and fired shots at the Al-Wafd Party, which is the oldest secular party in Egypt. Another set of Morsi’s militia besieged “Media City” where most of the independent TV channels are located. The militia attacked TV anchors known to disagree with Morsi and prevented TV guests who are known to oppose Morsi from entering the city, so they could not appear on TV and criticize the referendum.

Simultaneously, another group of the Morsi’s militia attacked the headquarters of newspapers knowing to oppose Morsi and the referendum. The Al-Watan newspaper was among the newspapers whose editor-in-chief went on TV to appeal to the president to stop his militia from attacking reporters and the newspaper building.

Through this all, President Obama’s position amounts to, “This is an internal matter and we leave to the Egyptian people to sort out!!”

What the Brotherhood is doing in Egypt is holding a gun to the head of its opposition trying to pass a constitution that so far failed to garner a greater support among Egyptians.

Once that becomes the law of the land, the race is on to turn Egypt into another theocracy headed by an Islamist fascist regime that soon after will threaten the security of the free world. At the heart of it is the Obama administration and its failed foreign policy, and what I see as the desire to destroy moderate Egypt and turn it over to the fanatic elements of the society, creating a monster that will turn on its creator.

Michael Meunier is the President of Al Haya Party in Egypt. He is the founder of the U.S. Copts Association and a democracy, human rights and religious freedom activist.

Only in the USA could one view the purchase of property by foreigners a sign of recovery. Chinese citizens buing...