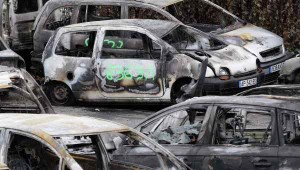 Notice the Arabic Graffiti painted on one of the burned cars.

Interior Minister Manuel Valls said Tuesday that 1,193 vehicles were burned overnight around the country.  Clashes between police and offenders in the New Year’s Eve took place in the Muslim majority districts in the city of Strasbourg and Mulhouse.  About seven police officers were attacked New Years eve night.

Around 1,200 cars were burned by rioting Muslims on the New Year’s Eve in France, where the mass burning cars in the national holidays are kind of tradition among Muslim residents of the disadvantaged suburbs of immigrants.

In the summer of 2010, the Interior Minister Brice Hortefeux made the decision to stop the practice of  counting  the demonstrators, as they claimed it only encourages the Muslim youths to commit such crimes .  The current Minister of the Interior said that “the French people should know the truth.”

The American media has mostly not reported on these incidents, and when they do rarely mention their background or religion.