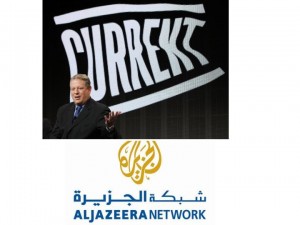 Al-Jazeera, the Pan-Arab news channel that struggled to win space on American cable television, has acquired Current TV, boosting its reach in the U.S. nearly ninefold to about 40 million liberal households. With a focus on U.S. news, it plans to ‘re-brand’ the left-leaning news network that cofounder Al Gore couldn’t make relevant.  Glenn Beck’s Blaze Media approached the struggling cable news network last year, the Wall Street Journal reported, but was denied the right to purchase by the liberal progressives.

Al-Jezeera is a Middle Eastern pro Islamic news channel, they allowed Al- Queda to send coded messages around the world after 9/11. Al-Jezeera is pro-Islamic and has been vary controversial for example Al Jazeera tried to cover up the sexual assault on CBS News reporter Lara Logan in Egypt.  They started off as moderate to catch a western audience but have since been  shifting steadily from a posture of moderation and coexistence to a total and open alignment with the most extreme elements of the Arab world, including Hamas and Hezbollah.

If Egyptians resent the U.S. for befriending former Egyptian president Mubarak, Al Jazeera hates Mubarak for befriending America. Al Jazeera is also the most powerful voice of the Muslim Brotherhood, upon whom they can rely for full collaboration.

Al Jazeera’s editors choreograph a worldview in which an irreconcilable struggle rages between an evil-meaning Western oppressor and its helpless, righteous Arab victims. Most worrisome, perhaps, it often reports on supposed Western conspiracies behind most Arab hardships or failings, thus fueling the sense of helplessness, humiliation and anger among Muslim youths and helping turn them into potential recruits for terrorist organizations. Thus it is not Islam motivating terrorist acts, its the Western powers like USA and Europe according to Al-Jazeera.

This goes well with the American Liberal leftist apologist for terrorist actions, rarely linking the acts to Islam, rather choosing to blame them on a youtube video, or workplace violence. Current TV to take a similar path moderate left leaning toward eventual complete apologizing for terrorism and Islam. 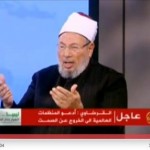 Al-Jazeera in Qatar continues to broadcast the radical teachings of Sheik Qaradawi’s.  Qaradawi, was the religious leader who authorized suicide bombings against Israeli civilians and American personnel in Iraq. He also ‘preached’ in January 2009 to millions of Al Jazeera listeners “count their numbers [the Jews], and kill them down to the very last one”.

Al Jazeera is an anti-Western propaganda machine that also engages in news services for profit and status, expect no different with their ownership of Al Gores Current TV. Time Warner has already dropped the news network on the news of it being purchased by Al Jezeera.

Americans should be deeply concerned about the consequences of further empowering Al Jazeera’s with their purchase of Current TV, which would lead to liberals being more apologetic toward Islamic motives and terrorism. Expect further apologizing for Palestinian terrorism and anti-semantic brainwashing of its liberals watchers.

Illinois is attempting to ban and confiscate all firearms

Illinois Senate President John Cullerton will reportedly introduce a draconian bill today in the Illinois legislature that will effectively ban...