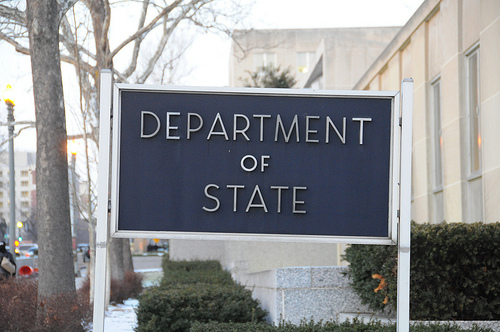 On November 27, a State Department advisory board, the International Security Advisory Board (ISAB), recommended that the Obama Administration ignore the Constitution and break the law to unilaterally reduce the number of nuclear arms in the U.S. nuclear stockpile.

Set aside the fact that such unilateral arms control measures would weaken the U.S. nuclear deterrent and thereby pose grave national security risks. While this concern is extremely important, the legal issues are fundamental to the conduct of national security policy under the Constitution and the rule of law.

The central legal issue in this instance is the proper form of any international arms control agreement, whether it be a treaty agreement or non-treaty agreement. The Constitution gives the President and the Senate together the treaty-making power under Article II, Section 2, Clause 2 of the Constitution, where the Founding Fathers established a special procedure for their approval. The President may ratify a treaty only with the advice and consent of the Senate, which requires a super majority vote of two-thirds. Non-treaty agreements are not subject to this procedure. Accordingly, the ISAB’s recommendation to pursue arms control with Russia through a reciprocal unilateral arrangement in effect urges the executive branch to bypass the Senate and the Constitution in the pursuit of arms control.

This is accurate, but only tells a third of the story regarding the legal problems with the unilateral approach to arms control. The steps recommended by the ISAB are also inconsistent with statutory law, particularly as it pertains to arms control and internal State Department guidelines about when treaties are required.

Regarding statutory law, the relevant provision is found in Title 22 of the U.S. Code and focuses specifically on arms control. Indeed, it is a provision under the Arms Control and Disarmament Act. Section 2573 of Title 22 states the following:

Note the sweeping nature of the language in the law. It does not say that any international agreement on arms control shall be drafted as a treaty document, but it does say that no action in the area of arms control may be pursued other than by treaty—except where Congress has specifically authorized such an action. Clearly, this language specifically envisions unilateral actions taken outside the context of any international agreement.

Article II, Section 3 of the Constitution contains the following phrase regarding the President’s obligations: “[H]e shall take care that the laws be faithfully executed.”

If the President accepts the advice of the ISAB, he will effectively be ignoring a key requirement imposed on him by the Constitution. He will be refusing to execute Section 2573 of Title 22 of the U.S. Code in a faithful manner.

Finally, the State Department itself has internal guidelines regarding the kinds of subjects in any area that should take the form of treaties. Specifically, Section 11 FAM 723.2 (C) of the State Department’s Foreign Affairs Manual states the following:

It is nothing less than appalling that a State Department advisory board of such prestige as the ISAB would propose to the department an approach to arms control that ignores two provisions of the Constitution, violates statutory law, and proposes to set aside the State Department’s own internal guidelines.

What is just as appalling is that the ISAB would propose an unwarranted expansion of executive power in the conduct of foreign affairs at the expense of the Senate—all for the purpose of diminishing the power of the President to engage the rest of the world from a position of military strength. This is the very definition of using the tool of international relations to undermine the sovereignty of the United States.

The Senate, to its benefit, has a tool at its disposal to thwart this power grab proposed by the ISAB. President Clinton attempted a similar usurpation when he attempted to establish succession to the Soviet Union under the 1972 Anti-Ballistic Missile (ABM) Treaty. He asserted that he had the power to conclude such a succession arrangement with several states that emerged from the former Soviet Union without formally amending the ABM Treaty. Such an amendment would itself be a treaty document and subject to Senate advice and consent.

Accordingly, the Senate should find a currently unratified treaty that is otherwise unobjectionable, but that President Obama highly values, and attach a similar condition. This condition should require that the President certify to the Senate that he will take no action that would obligate the United States to reduce or limit its Armed Forces or armaments in a militarily significant manner pursuant to Article II, Section 2, Clause 2 of the Constitution unless Congress has specifically authorized such action.

Middle-class workers will take a bigger hit to their income proportionately than those earning between $200,000 and $500,000 under the...