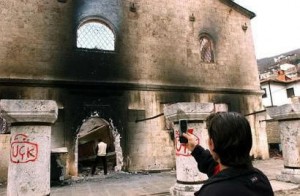 A young Muslim man takes a picture of his friend urinating on a burned down church in Kosovo.

Serbian Orthodox Monastery of Assumption of the Virgin Destroyed.

Belgrade: Albanians last night completely destroyed the monastery “Assumption of the Virgin” in southern Serbia. Monastery of the Assumption of Virgin” which is located in the vicinity of Vladicin Han was vandalized last night by Albanian Muslims. The door was smashed, and the entire interior was broken. The money from the candle sales and other item inside the monastery is stolen, and all the icons were smashed. Mother Paraskeva (62 years old) confirmed this information. She was very upset fear for her safety.“I’m afraid they will come back, but I’m not going anywhere. I’m here alone and old, but let them come, someone has to defend,“said Paraskeva.

“There’s nothing left, this is terrible! The whole world stood up on his feet because of a cartoon of Muhammad, but when all monasteries and churches destroyed, no one responds,” she added. Asked whether he knows who could have done this, Paraskeva replied that everything is known, but that no one will be interested in this case.

“Albanian Muslims from Kosovo are organized and planned to come and destroy Serbian monasteries in this area. This is not the 1st time something like this happens. Last year on Good Friday they attacked me. If I didn-t have my stick, I would hardly protect myself. The Monastery of the Assumption of the Virgin is under the auspices of Bishop Pachomius, who was accused for rape of boys, which Paraskeva says to be the worst invented lies by the Albanians.“They started all these stories and even payed the people to lie about it. Some have been given 35 000 DM (Deutsche Marks) to create a bad image of the Bishop. The Monastery is located in the village of Mrtvica, 14 kilometers from Vladicin Han town. It originates from the 4th century and it is the oldest shrine in Vranje district.

Did Clinton with NATO help to radicalize the Balkans?

Is Obama Sending anti-aircraft and anti-tank missiles to Hamas Terrorist?

How did American anti-aircraft and anti-tank missiles end up on Hamas doorstep? On Friday, Egyptian authorities following a tip from...