U.S. President Barack Obama is set to nominate former Nebraska senator Chuck Hagel as Secretary of Defense, according to various reports. The move signals that the Administration intends to continue the Middle East policy that could be described as “speak softly and carry an even softer stick” vis-à-vis the resurgent Islamist threat. 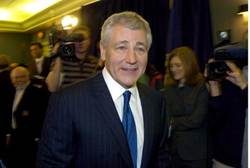 “Key Democrats working closely on the nomination process” told The Daily Beast‘s Eli Lake that the president is expected to announce the Hagel selection Monday or Tuesday. These sources said Obama did not decide on Hagel until this week, after considering Ash Carter, the current deputy secretary of defense, and Michèle Flournoy, a former No. 3 at the Pentagon, for the job.

Sen. John Cornyn (R, TX) told Lake Friday, “Chuck Hagel’s opposition to Iranian sanctions and support for direct, unconditional talks with its leaders is both at odds with current U.S. policy and a threat to global security. To make matters worse, he has called for direct negotiations with Hamas. The worst possible message we could send to our friend Israel and the rest of our allies in the Middle East is Chuck Hagel.”

“The next secretary of defense will preside over a period of budget austerity when the military will transform from a force capable of waging two land wars at once to a stealth military capable of counterterrorism missions,” Lake wrote.

The nomination is going to encounter stiff opposition from Republicans, but some Democrats also oppose the move. “Many of the most right-wing GOP Senators have already categorically vowed that they will oppose the nomination,” writes the Guardian, “claiming he’s hostile to Israel, ‘soft’ on Iran and anti-military. Hagel’s confirmation thus likely hinges on the willingness of Democrats to support it.”

Some of the democrats who oppose the nomination, such as Sen. Chuck Schumer and Rep. Eliot Engel, agree with Republicans that Hagel’s views on Hamas and Iran are soft.

But other liberals are opposed to Hagel because he voted in 1998 against appointing James Hormel as Ambassador to Luxembourg on the ground that Hormel, as Hagel put it, was “openly, aggressively gay.”

In addition, some Democrats note that Hagel is a Republican, and say that Obama should nominate a Democrat “in order to show that Democrats are capable of running the Pentagon and military policy,” writes the Guardian.

According to the Washington Free Beacon, Hagel made an objectionable statement when he served as president and CEO of the World USO from 1987 to 1990. Hagel reportedly “expressed intense opposition to the USO Haifa Center during a tumultuous 1989 meeting with Jewish leaders, according to multiple sources involved in the fight to keep the post open.”

The Free Beacon quotes Marsha Halteman, director for military and law enforcement programs at the Jewish Institute for National Security Affairs (JINSA), which led the battle to keep USO Haifa operational, who said: “He said to me, ‘Let the Jews pay for it.’ He essentially told us that if we wanted to keep the USO [in Haifa] open—and when I say ‘we’, he meant ‘the Jews’—he said the Jews could pay for it,” said Halteman.

“I told him at the time that I found his comments to be anti-Semitic,” she said. “He was playing into that dual loyalty thing.”

January 6, 2013 14:47 by Simon Plosker The Washington Post has published a story examining the trauma suffered by Gazan...