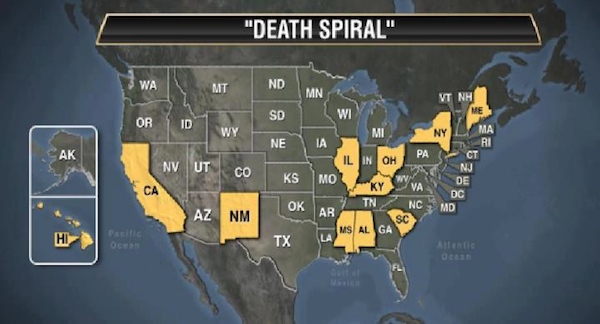 The photo shows the 11 states where private sector workers are outnumbered by people dependent on the government. Eleven states made the list of danger spots for investors on Forbes. Residents of these 11 states can look forward to a rising tax burden, deteriorating state finances and an exodus of employers. The list includes California, New York, Illinois and Ohio, along with some smaller states like New Mexico and Hawaii.

If your career takes you to Los Angeles or Chicago, don’t buy a house, Rent. If you have money in municipal bonds, clean up the portfolio. Sell holdings from the sick states and reinvest where you’re less likely to get clipped. Nebraska and Virginia are unlikely to give their bondholders a Greek haircut. California and New York are comparatively risky.

Two factors Forbes used to determine whether a state makes this elite list of fiscal hellholes. The first is whether it has more takers than makers. A taker is someone who draws money from the government, as an employee, pensioner or welfare recipient. A maker is someone gainfully employed in the private sector.

California got on their list. It has pampered a large army of civil servants while using every imaginable trick to chase private-sector jobs away, the latest being a quixotic scheme to reduce the globe’s atmospheric carbon.

In Case You Missed It:  Get Ready for the Economic Collapse
Posted in Financial and tagged California, Economy, Liberalism, Obamanomics, Recession, Unemployment.

Michigan Right-to-Work Law: How to Fight for the Freedom to Work