Federal welfare spending will skyrocket 80 percent over the next decade, according to new analysis by the minority side of the Senate Budget Committee. Here’s a chart, provided by the committee, detailing the growth in spending: 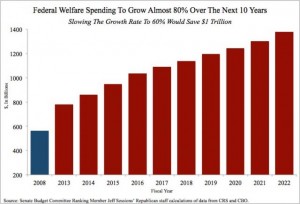 “This chart displays projected federal spending on federal welfare programs over the next ten years, based on data from the Congressional Research Service and Congressional Budget Office,” the Republican side of the Senate Budget Committee explains. “These figures do not count state contributions to federal welfare programs (primarily on low-income health assistance) which brought total welfare spending in FY2011 to more than $1 trillion – dwarfing any other budget item including Medicare and Social Security, and totaling enough to mail every household in poverty a check for 60k each year.”

Currently, 95% of spending on means-tested poverty assistance falls into four categories: cash assistance, health assistance, housing assistance, and social and family services. Welfare spending has increased on a year-over-year basis regardless of whether the economy has improved or unemployment has declined, and is projected to continue this dramatic rise indefinitely. Spending on these poverty programs will rise approximately 80% from FY2013-FY2022, representing a total cost of $11 trillion – roughly one quarter of cumulative federal spending. Slowing the growth rate from 80% to a still massive 60% would thus result, according to standard congressional budget accounting, in a $1 trillion savings over ten years.

Part of the large increase in welfare spending is driven by a series of controversial recruitment methods that include aggressive outreach to those who say they do not need financial assistance. Recruitment workers are even instructed on how to “overcome the word ‘no’” when individuals resist enrollment. The USDA and Department of Homeland Security also have promotions to increase the number of immigrants on welfare despite legal prohibitions on welfare use among those seeking admittance into the United States.

Senator Jeff Sessions, the ranking member on the Senate Budget Committee, responds. “No longer can we measure compassion by how much money we spend on poverty but how many people we help to rise out of poverty. That is why compassion requires us to reform a broken welfare state that is fostering dependency and hurting families and communities, and failing in the most important goal of helping people achieve self-sufficiency. Our concern for those in need compels us to help more people find gainful employment and the ability to care for themselves financially. Welfare spending has increased thirty percent in the last four years, but the number living in poverty has gone up, not down. The best example of our broken welfare state may be SNAP, or the food stamp program: food stamp spending has increased every single year since 2000, even when the economy is improving. 1 in 6 Americans are now on food stamps and the USDA has an aggressive campaign to enroll millions more – whether they need the benefit or not. Certainly, identifying those who are receiving benefits but who are not in need and who do not qualify is something both parties should be able to agree on,” says Sessions in a statement.

“We must return to the moral principles of the 1996 reform and the idea that, over time, unwise welfare programs damage not only the Treasury but the recipient. Normal support structures like family, church and community are replaced by federal bureaucracy while the incentive to find work is reduced. President Obama recently said that ‘every dollar we budget, every decision we make has to be an expression of who we wish to be as a nation, our values.’ It is through that prism that we should address the need to reform our welfare programs, ensure resources are targeted to those in genuine need, and help more people transition from dependence to independence.”

In Case You Missed It:  Attorney, VP of Legal Affairs at Liberty Counsel Discusses Lawsuits in NY and What You Can Do if Your Employer is Demanding You Get the Jab (AUDIO)
Posted in Financial, Tyranny and tagged Economy, Financial, Obama, Obamanomics, Recession, Unemployment, United Socialist States of America, US Citizen.

Working Americans receiving their first full paycheck of the year may have had a rude awakening today. Despite all the...