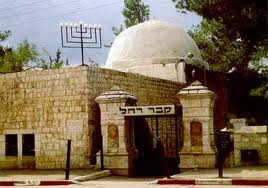 About 50 Muslim Arabs mounted an assault on Rachel’s Tomb, just outside Bethlehem, Wednesday evening. They threw pipe bombs, fire bombs and rocks at the security forces guarding the compound, injuring one soldier lightly.

The soldier, who was hit by a rock, received medical treatment on the spot and did not require hospitalization.

The IDF Spokesman said that the Arabs threw nine pipe bombs and 18 fire bombs. One of the pipe bombs caused some damage to the security wall surrounding the complex.

The IDF Spokesman said that the soldiers are using riot dispersal gear against the attackers.

In past years, any large scale attack with explosives and fire bombs would in all probability have been repelled with live fire. However, the IDF is shackled by a Military Attorney’s Office and State Attorney’s Office that often prosecute soldiers for opening fire against attackers unless they can prove a clear and present danger to their lives.

Mark Langfan’s Katyusha Rocket Range All over Israel article is one of Arutz Sheva's most popular articles ever, with a...