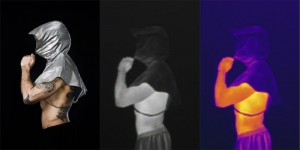 Surveillance cameras are ubiquitous, especially in the U.K.. and in the United States, now the USA has approved the use of drones for domestic surveillance. Then there’s the “Stingray” tool used by the FBI to track your cell phones. It’s enough to make even those who’ve gotten nothing hide feel nervous.

New York-based artist Adam Harvey doesn’t like it one bit. So he’s taken it upon himself to design anti-surveillance clothing to foil Obama’s snoopers.

Harvey has been looking at the effects of such surveillance on culture for some time. Last year he designed a kind of face makeup called CVDazzle to avert face-recognition software.

In the spirit of fooling cameras – and messing with surveillance – Harvey has now come out in a set of hoodies and scarves that block thermal radiation from the infrared scanners drones use. Wearing the fabric would make that part of the body look black to a drone, so the image would appear like disembodied legs. He also designed a pouch for cell phones that shields them from trackers by blocking the radio signals the phone emits. For those airport X-ray machines, he has a shirt with a printed design that blocks the radiation from one’s heart.

The materials the clothes are made are specialized and expensive, so these aren’t the kinds of fashions that the local discount store will have – at least not yet. Harvey does plan to offer the clothes for sale, though.

He sees the designs as a kind of conversation about surveillance in society at large. If we’re going to be watched all the time, shouldn’t we find a way to deal with that?

If you want to see Harvey’s work, you can find it on the Primitive London web site.

A Housing Finance Market Without Fannie Mae and Freddie Mac

What would the potential impact on the economy be if Fannie Mae and Freddie Mac—the housing finance government-sponsored enterprises (GSEs)—were...