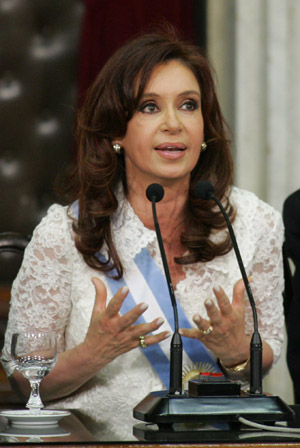 Is President Obama channeling Juan Perón? The President does seem to have a few things in common with the political descendants of the late Argentine dictator.

For example, due to ongoing lawsuits stemming from Argentina’s still unresolved $100 billion sovereign debt default in 2001, Argentina’s current president, Peronist Cristina Fernández de Kirchner, has been forced to charter private jets when she travels abroad. That’s because she fears that her presidential plane (dubbed “Tango 01”) would be seized by creditors the moment it landed at a foreign airport.

Last year Argentina’s so-called hold-out creditors actually did seize an Argentine Navy training frigate, the ARA Libertad, during a port call in Ghana. According to the Los Angeles Times, the vessel was detained “for about two months, until an international court ruled that, as a military asset, it was immune from seizure.”

The source of Argentina’s debt predicament is the same one that is creating mounting problems for the U.S.—years of reckless and out-of-control government spending, budget deficits, and sovereign borrowing.

Although the U.S. is not in danger of imminent default Argentina-style, continued overspending by the U.S. government—at a rate of more than $1 trillion per year—and the fed’s failure at “prioritizing spending so outflows match inflows” cannot go on forever at anything like the present pace.

Let’s hope that the U.S. government gets its act together before Air Force One is seized by creditors!