The European Union, the World Bank, and a host of European countries working outside the framework of the EU, have for years been funding a youth-oriented television program in the Palestinian Authority that has promoted terrorism as an ideal act of “martyrdom,” honoring terrorists whom Israel has released from prison, and glorifying acts of terror in which Israeli women and children were murdered. Now, said Palestinian Media Watch, an independent group that monitors Arab media, the TV show has begun a new campaign – encouraging young viewers to prepare to hijack airplanes. 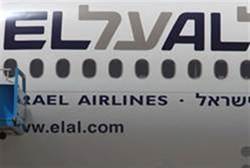 A poem that has been broadcast repeatedly on the program, called “Raise Your Voice,” says, among other things, that Israelis “should expect us, even though we are the unexpected. We are at all airports, aboard all planes. We stop off in Rome and Zurich, and peep out from under rocks. We hide behind statues and plants. Our brave ones attack without warning, with anger, thunder, lighting and storm. They come in the garb of the prophet and with the sword of the warrior.” The poem also threatens the U.S., saying that “a gun in the hand of the little one can kill the great one.”

According to PMW, the mention of Rome and Zurich in the poem – two cities where Arabs hijacked El Al planes, in 1968 and 1969 – makes clear the poem’s intention.

After the poem was read, the young presenters of the program thanked the NDC (Non-Governmental Organization Development Center), which provides funding to the PA organization that produces the program. In the past, PMW said, the program has hosted dozens of PA terrorists for interviews. Terrorists have also appeared on other programs produced by the company, called Fialara. Other organizations that support Fialara include international NGOs Save the Children and Cordaid, PMW added.

In Case You Missed It:  Did Balfour Declaration Give Jews a License To Steal?

One of the greatest nightmares recently protested by Iran and Syria – a shipment of NATO’s Patriot anti-ballistic missile defense system...