Voter turnout for Israel’s elections has been high Tuesday morning, with 38.3% of voters exercising their right to vote by 2:00 p.m. 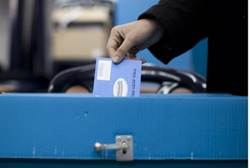 The turnout by 12:00 noon was the highest since the 1999 election, 14 years ago. One quarter of registered voters voted in the first five hours of the election, with 10 hours left.

A high voter turnout is usually considered bad news for small parties that may not pass the threshold for entering the Knesset. It is also bad for hareidi parties, which enjoy a high turnout of their supporters and would rather see a low turnout among their rivals’ supporters.

Likud’s Gideon Saar was quoted as saying he is worried about the relatively high turnout in leftist strongholds.

In Case You Missed It:  Australia throws Novak Djokovic out of the country, declares no unvaccinated athlete is welcome
Posted in Israel and tagged Election, Freedom, Israel, Knesset.

Tomorrow, Secretary of State Hillary Clinton will deliver testimony before the Senate Foreign Relations Committee and the House Foreign Affairs...