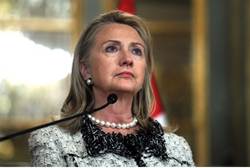 After being pressed today by Republican Senator Ron Johnson to explain how it was that over the course of weeks, the Obama Administration stood by an absurd story claiming that four Americans we’re murdered in Libya due to a spontaneous protest gone bad, outgoing Secretary of State Hillary Clinton played the indignation card.

Because she obviously had no answer to justify the ongoing White House deception, Secretary Clinton chose chose theatrics over a straight answer and clarity:

With all due respect, the fact is we have four dead Americans. Whether it was because of a protest or because guys outside for a walk one night decided to go kill some Americans. What difference at this point does it make?

When Hillary Clinton was a young lawyer in 1974, she earned her bones in DC as a member of the impeachment inquiry staff during the Watergate scandal. But why? What difference did a little burglary make when thousands were dying in Vietnam?

Poor Condi Rice. Why didn’t she pull this during the 9/11 hearings. “What difference does it make what we knew and when we knew it, Senator? 3,000 Americans that September morning!”

Yeah, that would’ve gone over real well with the media.

But Rice never would’ve done such a thing, because she and the Bush Administration had nothing to hide.

The Obama administration, however, cannot say the same.

It was a smart ploy, though, because Hillary knows the media’s already written headlines claiming her “brilliant” testimony today has secured her place in a 2016 White House. Heck, if she manages to work support for “marriage equality” into today’s testimony, the media coronation will begin before the day’s out.

But let’s be honest, these hearings are completely unnecessary. After all, the filmmaker responsible for all of this is in prison. Case closed.

Bottom line: Four Americans died to gross negligence and incompetence on her watch. Regardless, by the time the Sunday shows air, the media will turn Libya into a triumph for Hillary.

In advance of Wednesday’s vote on suspending the debt ceiling, six Republican congressmen joined The Heritage Foundation’s Bloggers Briefing to...