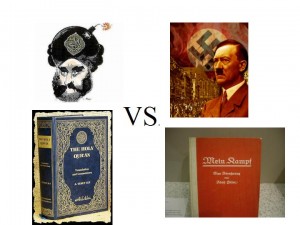 Many are started to compare  Hitler’s Manifesto from over 80 years ago, “Mein Kampf”, to that “Islamic Holy Book” to Muslims, the Qu’ran.  Commenters have noted the remarkable similarities between the two, and indeed, the resemblances are more than skin deep and are worth examining in more detail.  A closer look at the facts reveals that Islam (not ‘Islamism’) and Nazism are two kindred ideologies with many, many commonalities.

Let’s start with titles. The very title of Herr Hitler’s tome means “My Struggle” in English. One could even entitle this book “My Jihad” and this Islamic term would have the same precise meaning. “Kampf” in a Nazi ideological context and “Jihad” in the Islamic one are almost identical. That in itself goes a long way to explaining why ‘Mein Kampf’ is still such a best seller in current times all over the Islamic World, including in supposedly ‘moderate’ Islamic states like Turkey.

But the similiarities between the Qu’ran and Mein Kampf don’t just stop there. Far from it. Fellow blogger and ally Freedom Fighter over at his/her blog Joshua Pundit has come up with an exceptional, enlightning list of how alike Islam and Nazism really are:

Mein Kampf– States that Germans are the superior race of mankind and that Germany is destined to rule the world , and dominate all other races and nations.

The Q’uran-States that Islam and Muslims are the superiors of mankind and that Islam is divinely mandated to rule the world and dominate all other races, creeds and nations.

Mein Kampf-Says that the German State is to have control over every aspect of life. Says all individuals must submit to the State.

The Q’uran-Says that Islam and Sharia is to have control over every aspect of life. Says all individuals must submit to Islam.

Mein Kampf-Says that Germans have the duty to claim their divinely appointed place in the world by whatever means necessary. Puts loyalty to the Volk (the race) above all other ethical considerations.

The Q’uran-Says that Muslims have a duty to wage Jihad and to advance Islam’s domination over the world (Dar Islam and Dar Harb) by any means necessary. Places loyalty to fellow Muslims (Umma) and Islam above all other ethical considerations.

Mein Kampf-Mandates that men are superior to women and that women’s place should be limited to procreation, the kitchen and the home.

The Q’uran-Mandates that men are superior to women and that women’s place should be limited to procreation, the kitchen and the home. (Admittedly, the Q’uran goes quite a bit farther than Mein Kampf on this topic)

Mein Kampf-Says that homosexuals are ‘race traitors’ and should be condemned to death. (Many, in fact were murdered in the concentration camps).

Mein Kampf-Sets out a detailed model for world conquest, including rules for how conquered peoples are to be suppressed and dominated by the German race. States that the wealth, resources and property of subject peoples belongs to Germans by right and the right to life for subject peoples is dependent on Germans. States that non-Germans have no legal or civil rights.

The Q’uran-Sets out a detailed model for world conquest, including rules for how conquered peoples are to be suppressed and dominated by Muslims. States that the wealth, resources and property of subject peoples belongs to Muslims by right and the right to life for subject peoples is dependent on Muslims. States that non-Muslims have no legal or civil rights. (in truth, a lot of this has its basis in the Hadith and the Sunna, but both derive essentially from what’s in the Q’uran, along with all the other aspects of Sharia).

Mein Kampf-Divides the world into ‘German land’ and enemy territory. States that land with Germans living in it or land that once had Germans ruling it rightfully belongs to Germany, and Germany is entitled to get it back by any means necessary.

The Q’uran-Divides the world into ‘Dar al Islam’ (Muslim ruled land) and enemy territory (Dar al Harb). States that land with Muslims living in it or land that once had Muslims ruling it rightfully belongs to Dar al Islam, and Muslims are entitled to get it back by any means necessary.

Mein Kampf-Blames the Jews for society’s ills and says that they will be exterminated.

The Q’uran-Blames the Jews for society’s ills and says that they will be exterminated. (“On the day of Judgement the rocks and trees will call out ‘O Muslim! There is a Jew hiding behind me! Come and slay him!”)

Islam and Nazism. Mohammed and Hitler. As plain as day, they are cut from the same cloth.  Hitler actually mentioned that he llikes the ideology set within Islam in the quote below.

“You see, it’s been our misfortune to have the wrong religion. Why didn’t we have the religion of the Japanese, who regard sacrifice for the Fatherland as the highest good? The Mohammedan religion too would have been much more compatible to us than Christianity. Why did it have to be Christianity with its meekness and flabbiness?”

In Case You Missed It:  NEVER FORGET: On This Day 19 Years Ago 2,977 Americans Were Murdered in the Name of Islam
Posted in Terrorism and tagged Anti-Semitism, Germany, hate crime, Islam, Muslims, Nazism, Terrorism.

The Unites States has declared that Israel should take part in a United Nations review of its human rights situation...