To protect Israelis living near Gaza, the IDF is using the latest technology. But the army is also going back to a decades-old, low-tech solution: defensive forestation. 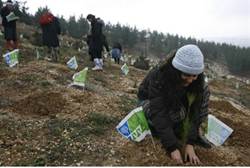 The tactic is based in the simple concept of reducing terrorists’ accuracy by blocking their view. Defensive forestation was a common technique from the first years of the modern state of Israel to the 1960s.

Trees were planted close together near military or civilian buildings in order to make it harder for terrorists to aim, and to provide some cover from fire.

Gaza terrorists’ escalation in attacks on southern Israel in recent years led the IDF to bring back the program. The military is now working with the Jewish National Fund and other organizations to plant thick mini-forests around frequently targeted sites a short distance from Gaza.

On Thursday, trees were planted near the town of Netiv Haasarah in southern Israel. The trees are still small, but are expected to be large enough to provide cover within 2-3 years.

“This way, we can protect residents of the area near Gaza and provide them with a view of greenery, too,” Brigadier-General Elkabetz told the IDF website.

In the meantime, Lieutenant Colonel Imad Saif said, “Residents of the Gaza belt are experiencing quiet like we haven’t seen for a long time.” Terrorism from Gaza has been infrequent in the wake of Operation Pillar of Defense, a series of counter-terror strikes launched after Hamas began targeting major Israeli cities in the south with rocket fire.

Research Associate Sarah Torre joins Heritage in Focus to discuss the 40th year of legal abortion in the United States...