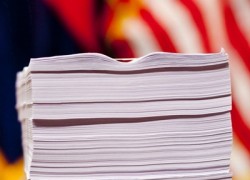 If the Occupational Health and Safety Administration (OSHA) regulated its own doings in the manner it does private business, the agency’s doors would surely be shuttered. So lousy is its record of accrediting workplace safety examiners that some applicants have waited 10 years for their paperwork to be processed.

It’s gotten so bad, in fact, that OSHA officials actually jettisoned their internal performance measures rather than even attempt to make the grade. In other words, the agency stopped tracking its operations because the results were so dismal.

All of which came to light during a recent investigation by the Government Accountability Office (GAO). According to the report, nearly half of the applications for accreditation under consideration as of June 2012 had been pending for between five and 10 years. With characteristic restraint, the GAO concluded that this dysfunctional bureaucracy “has potentially negative economic consequences.”

In non-government speak, that means safety testing labs are bureaucratically caged by OSHA, unable to innovate or expand. (It must be stomach-churning for these folks, who pay OSHA more than $17,750 to process a single application.) And without approved testing for new equipment, industry modernization and growth is inhibited.

There are alternatives. Several federal agencies, including the Federal Communications Commission, the Department of Health and Human Services, and the Consumer Product Safety Commission contract with private firms to manage lab accreditation. That probably seems radical to an agency like OSHA, which hasn’t reviewed its accrediting structure since the process was launched back in 1988.

So here’s an idea: While Congress remains trapped in budget gridlock, lawmakers could turn some attention to OSHA and force the agency to contract out for accreditation services. In doing so, they might actually accomplish something useful.

In Case You Missed It:  Cardiologist goes off script on live TV, warns covid vaccines pose a cardiovascular risk and must be shut down
Posted in Financial and tagged Congress, Financial, Foundry, Freedom, Governments.

Foreign Aid: There Are Many Ways Conservatives Can—and Should—Help the Poor

Daniel Hannan, a member of the European Parliament and one of Great Britain’s rising conservative political stars, reminds us that...