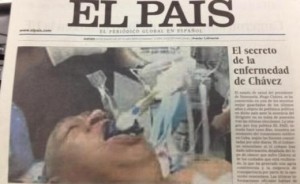 “The people are being told bald-faced lies about the situation the president is in,” Henrique Capriles, who lost last October’s presidential race to Chavez, said at a ceremony in Miranda state of which he is governor.

Longtime leader Chavez, 58, is convalescing from cancer surgery in Cuba and has not been heard from since his latest operation December 11.

Venezuela’s government has said the absent leader suffered a lung infection following his treatment that he subsequently conquered. Officials have also said that Chavez is signing documents, and even cracking jokes with aides.

For many Venezuelans, however, the idea of Chavez — a garrulous and bombastic leader who typically is seen for several hours at a time every day, without fail, on state radio and television, in addition to being a big Twitter user — choosing to be silent is simply unthinkable.

“The government is lying right in your face, telling bald-faced lies, because why would a person who can sign letters, who can tell jokes, not speak to the nation?” Capriles asked in damning tone.

Foreign Minister Elias Jaua said on Thursday that Chavez was making progress in his recovery from cancer surgery, but faced a tough battle ahead.

And on Saturday, Venezuelan Vice President Nicolas Maduro said Chavez had entered a phase of “complementary treatment to combat his illness.”

Maduro, Chavez’s handpicked political heir, did not say if that meant more radiation therapy, chemotherapy or some alternative cancer care and no date was given for when the president will return to Caracas.

The vice president on Friday showed a series of documents signed by Chavez and on Saturday he headed to Chile with a letter for regional leaders he said was handwritten by Chavez.

The president is a former paratrooper who first came to power in the oil-rich South American country in 1999.

He won another six-year term in October’s election, despite questions about his health.

Throughout his illness, first detected in June 2011, Chavez has refused to relinquish the powers of the presidency, even when leaving for Cuba last month.

He was too sick to attend his own January 10 inauguration, prompting the government to delay the swearing-in indefinitely under an interpretation of the constitution that was heavily criticized by the opposition.

The Chavez-controlled National Assembly and Supreme Court both approved the arrangement, which keeps his administration in place under Maduro until the president can take the oath of office for his fourth term.

In Case You Missed It:  552 COVID-19 deaths among fully vaccinated in Oregon as WHO warns of “false sense of security” from vaccines
Posted in Freedoms and tagged Cuba, Hugo Chavez, Socialism, Venezuela.

6 Easy Ways to Add Years to Your Life