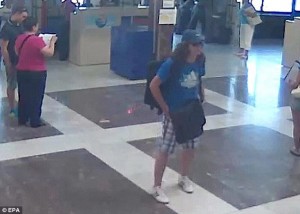 Mehdi Ghezali in the Bulgarian Airport just before the Bombing with dyed red hair, and western clothing.

(JTA) — Hezbollah may not be included on the European Union’s list of terrorist groups even if it did bomb Jewish tourists in Bulgaria, the EU’s top counter-terrorism official reportedly said.

On Monday, the news site EUobserver quoted the official, Gilles de Kerchove, as saying that Bulgaria’s investigation into the incident is likely to be concluded next month.

According to Israel, the Lebanon-based Hezbollah was behind the bombing on July 19 in Burgas, which targeted a bus of Israeli tourists and left five Israelis and one Bulgarian dead.

U.S. and Israeli officials have said the EU should blacklist Hezbollah if the Bulgarians find it guilty of perpetrating the attack. Its inclusion would make it illegal for Hezbollah sympathizers in Europe to send money to the group, which the United States and Israel list as terrorist.

“There is no automatic listing just because you have been behind a terrorist attack,” de Kerchove is quoted as saying. “It’s not only the legal requirement that you have to take into consideration, it’s also a political assessment of the context and the timing.”

He noted there is “no consensus” among EU states on whether listing Hezbollah, which is part of the Lebanese government, would be useful or not.

The London-based Arabic newspaper Al Hayat last week cited a “European source” as saying that he predicted the investigation will point to Hezbollah. The Bulgarian Interior Ministry denies the report, however