The United States said on Monday that it does not believe reports about an explosion at the Fordow uranium enrichment plant in Iran. 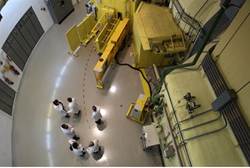 “We have no information to confirm the allegations in the report and we do not believe the report is credible,” White House spokesman Jay Carney told reporters. “We don’t believe those are credible reports.”

On Friday, the American WND website reported that an explosion had occurred deep within Fordow, which is carved into a mountain.

According to the report, the explosion which took place last Monday destroyed much of the installation and trapped about 240 personnel deep underground. The plant contains at least 2,700 centrifuges for uranium enrichment.

Iran denied the reports of the blasts on Sunday, claiming they were nothing but “Western-made propaganda,” according to the Iranian-based IRNA news agency.

An Israeli intelligence source confirmed on Monday that the Fordow facility sustained major damage in a “mega explosion” that occurred last week.

“We’re still in the early stages of trying to comprehend what happened and the extend of its significance,” the unidentified source told the British Times, adding that it was not yet known whether the explosion was “an act of sabotage or incidental.”

The official declined to reveal whether Israeli aircraft had been in the vicinity at the time of the explosion.

Iran admitted in the past it was moving more centrifuge machines for enriching uranium to the Fordow facility.

The existence of the facility near Qom only came to light after it was identified by Western intelligence agencies in September 2009. The UN’s nuclear watchdog has already confirmed that Iran begun enriching uranium at the plant.

Strategic Affairs Minister Moshe Yaalon, when asked during an interview with Army Radio on Monday morning whether the explosion had indeed occurred, would only respond with, “I read about it in the newspaper.”

Political analysts who were interviewed after Yaalon speculated that his response was a confirmation that such an explosion had indeed taken place.

(JTA) -- Hezbollah may not be included on the European Union's list of terrorist groups even if it did bomb...