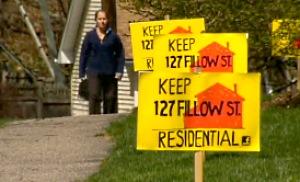 Residents of the area of the proposed mosque were not bigoted; they were worried about traffic and safety. (Screenshot: wtnh.com)

The Al-Madany Islamic Center of Norwalk in Connecticut wasn’t ready to give up when its proposal for a 27,000 square foot facility was turned down by the zoning commission over matters completely unrelated to religion. The Islamic Center sued, asserting—as you might have guessed—it was religious discrimination. The cry of “Islamophobia” got the Justice Department on its side, and the zoning commission suddenly changed its mind after a closed session.

The current Islamic Center was established in 1999 and serves 100 families. Feeling that more space was needed, the Center purchased the property in 2008 and made the $3.5 million proposal in the spring of 2010. It calls for a facility with an 80 foot minaret to serve as a community center and mosque, including eight classrooms, two libraries, three offices, a kitchen, a gymnasium and other rooms. It has a capacity for 1,000 people.

The proposal was rejected in June. The officials and residents that opposed it never referenced Islam and repeatedly emphasized that religion had nothing to do with it.

Mayor Richard Moccia said, “It was not based on any religious bias.” Commissioner Adam Blank said community centers are not allowed in triple AAA residential zones. Additionally, he said, parking was only allocated for the prayer hall that is 3,000 square feet, leaving the rest without parking.

Isabelle Harqgrove of “the “Keep 127 Fillow Street Residential” was concerned about increased traffic and its potential to “fundamentally alter the character of this quiet, New England neighborhood.” Local resident Brian Dough complained at a public hearing about the already heavy traffic in the morning. 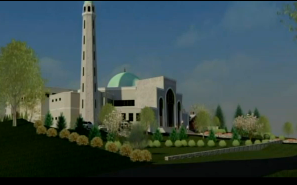 A drawing of the proposed Islamic center (Screenshot: wtnh.com)

“I don’t want to live near a Wal-Mart or a 27,000 square foot building, and I don’t think anyone in the neighborhood does. There’s no room, and this is huge,” he said.

Israel Herskowitz of the Stonegate Condominium Association that opposes the project said, “The reason why it was rejected is it’s too big a development for too small a property … That would be the same if it was a church, or it was a synagogue.”

The Center rebutted by presenting a traffic study that projected that only 100 people and 50 cars would arrive for Friday prayer services. It also offered to help reduce traffic on special holidays by holding two services and hiring a police officer to direct traffic. The zoning commission chairman was skeptical of the traffic study because it didn’t include the rear building. The Center claims that it will not use both buildings at the same time.

When the zoning commission ruled against the Center, the Center responded with a lawsuit, accusing it of anti-Muslim bias. Even one supporter of the Center’s proposal, Rabbi Jon Fish of Congregation Beth El, felt it was a dirty tactic.

“We all have problems with parking and space. It’s clear that the people who are concerned for their neighborhood are also good Americans, who also care a great deal about the diversity of our community. No one should be cast as a bigot,” he said.

Nonetheless, the “Islamophobia” accusation got the Justice Department to start an investigation. On November 29, the zoning commission had a private meeting and approved the proposal “subject to an agreement depending on the terms of a final settlement.”

Herskowitz decried the “backroom politics” that left him and other residents out of the process. “We don’t know what’s in this proposed settlement. It’s frustrating,” he said. His group has filed a Freedom of Information Act request to find out.

In Case You Missed It:  ENCOUNTERS: A NECESSARY EVIL

Few words are as powerful as “Islamophobia.” It preys upon the emotions of Americans disgusted by genuine acts of anti-Muslim bigotry. It tempts the politicians concerned about their public image. For Islamists uncomfortable with legitimate questions, it moves the conversation to victimization. And, as we now know, it compels the Justice Department to help get your mosque approved.

Ryan Mauro is RadicalIslam.org’s National Security Analyst and a fellow with the Clarion Fund. He is the founder of WorldThreats.com and is frequently interviewed on Fox News.

Obama Planned to Murder Syrian Citizens and Blame it on Assad

By Louise Boyle U.S.'backed plan to launch chemical weapon attack on Syria and blame it on Assad's regime' Leaked emails...