On January 6, the Sacramento Bee published a 1000-word polemic by Dan Morain attacking my opposition to the “fiscal cliff deal.” To its credit, the Bee published my response to the public policy issues involved, but the innuendoes, inaccuracies and omissions in Mr. Morain’s column are so stark as to require a longer reply for the record. I have italicized Morain’s charges and followed them with my responses. 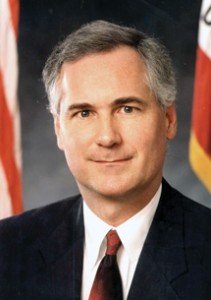 “Never one to build bridges, Rep. Tom McClintock has spent the better part of 30 years in office deriding the government that gives him his paycheck.”

I revere our government. I have spent my entire adult life championing the genius of the American Republic and its unique principles of individual liberty, Constitutionally limited government and personal responsibility. I challenge Mr. Morain to cite one word that I have ever spoken or written in all my years that derides the miracle of American government or the principles upon which it rests.

Perhaps what he refers to is my criticism of policies he advocates that are rapidly perverting our government into the European model of collectivism and statism that has produced misery, economic stagnation and social unrest wherever it has been imposed.

“But as he showed last week, his political machine of one has gained compatriots among the shrunken but more conservative band of Republicans representing California in the House. That doesn’t bode well for California as it tries to get back some of the money it sends to Washington, and certainly not for the Sierra district McClintock represents.”

Morain obviously believes the role of a Congressman is to plunder the national treasury. Indeed, it is precisely this philosophy that now threatens to bankrupt our nation. The very essence of American federalism is that national revenues should be spent for those projects that benefit the nation as a whole, while projects that exclusively benefit local communities should be paid for by those communities.

According to the CBS exit poll, voters supported repealing Obamacare (49 to 44 percent); agreed that “government is doing too many things better left to business and individuals (51 to 43 percent); and agreed that “taxes should not be raised to help cut the deficit (63 to 33 percent). I believe in this political universe, these are Republican positions.

“In California’s 53-seat delegation, McClintock is one of 15 Republicans, down by four from last year. He was one of the seven California Republicans who voted against the fiscal cliff legislation. Each remains in Congress.”

Morain isolates data in an attempt to suggest that my opposition to the bill was a minority position even among Republicans. In fact, a vast majority of House Republicans opposed the “cliff deal” by a vote of (151-85), a ratio of nearly two to one.

In fact, my office did answer questions put to it by Morain by email. His obvious bias, however, and the games played with facts and quotes displayed throughout his work, offer no confidence that any discussion with him would be fairly or accurately reported.

“First elected to the state Assembly in 1982, McClintock never rose to a leadership position, and routinely voted against annual budgets.”

Actually, I served as Republican Whip in the California Assembly from 1984 to 1989, a period of five years, until I could no longer support tax increases and deficits pushed by Republican leaders. I also supported the five annual budgets that were balanced and provided prudent reserves during the Deukmejian administration. In the House, I have supported – indeed, I have helped craft – the two budgets adopted in 2011 and 2012 to put our nation back on a course to fiscal solvency.

“His new district includes much of what makes California golden, and encompasses Lake Tahoe and Yosemite National Park, ironic given his dim view of environmentalist-backed legislation.”

If Mr. Morain would spend any time in the mountain communities of my district, he might discover how “environmentalist-backed legislation” has utterly devastated the economies of the region. For example, in Tahoe, where unelected regional planning agencies have largely usurped local governments, homeowners complain of being thwarted in their attempts to protect their property from fire danger, or from making minor and harmless improvements to their homes, or of being assessed exorbitant fees, or of being denied simple permits. Timber harvesting, mining, ranching and tourism which drove the economy of the Sierras have all been victimized by these policies. Mr. Morain notes the high unemployment rate in our communities but seems utterly oblivious to the impact of the policies he has successfully – if irresponsibly — advocated.

“Voters in the new district overlooked that he remains registered to vote in Elk Grove, which is 30 miles away from the eastern edges of the district and 200 miles away from its farthest reaches south of Yosemite.”

The fourth Congressional District is bigger than several states, and ironically, I live closer to Yosemite Valley than nearly half the residents of the district. Members of Congress are only required to live within their state. To my knowledge, Morain has never objected to local Democratic Congressmen living outside their districts in recent years or to others who have taken up residency in Washington and seldom visit. I have returned to the district every weekend the Congressional session permits since I was first elected in 2008.

In Congress, McClintock chairs the House Water and Power Subcommittee. But he has not used that post to help the region obtain funding needed to rebuild Sacramento River levees to avert a flood that would be disastrous for the people of Sacramento.

In fact, the House Water and Power Subcommittee has no jurisdiction over levee projects. It does have jurisdiction over Bureau of Reclamation dams and in that capacity I have vigorously argued for completion of the Auburn Dam that would provide 400-year flood protection for the Sacramento Delta (not to mention 800 megawatts of hydroelectricity and 2.3 million acre feet of water storage). Unfortunately, that project is vigorously opposed by the Sacramento Bee, and is now blocked at the state level.

“He is a one-man operation in a business that relies on compromise. The problem now is that other California Republicans in Congress appear to be coming around to his way of politicking.”

To Morain, compromise always means Republicans agreeing to Democratic policies. I believe that compromise is a means to an end and not an end in itself. I will always support compromises that benefit the country and oppose those that do it harm. Coming days will determine if the “fiscal cliff deal” so ardently advocated by Morain — that added $300 billion of new spending to the nation’s fiscal burdens and left 850,000 small businesses with massive tax increases — benefitted or harmed our economy.

In the meantime, I hope that he at least solves his own confusion: either I’m a “one-man operation” or I’m convincing my colleagues to the principles I stand on. He can’t have it both ways.

In Case You Missed It:  Another Blatant Lie By Biden Exposed, Americans Savings Are at Lowest Point in a Decade
Posted in Financial and tagged California, Congress, Conservatism, Financial, Freedom, Liberalism, Rep Tom McClintock, United Socialist States of America.